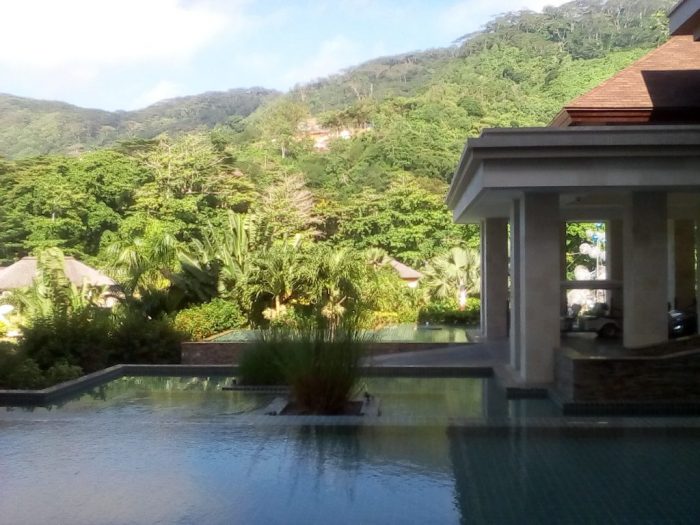 A beautiful view from the Savoy

NigerianFlightDeck 18th December 2017 Explore Comments Off on The Seychelles Islands: A little slice of heaven on earth 163 Views

AT first, when told I was going to the Seychelles, my initial thoughts were: ‘and where in heavens name is that?’ But in truth, it was my sentiments exactly as the island is a slice of heaven with lush green vegetation, a mountainous topography, beautiful green ocean and a weather that every vacationer would love all year round.

We commenced our journey from Bole International Airport, Addis Ababa with Ethiopian Airlines which flew the scenic route through the Indian Ocean giving passengers the thrill of experiencing firsthand the island’s beauty from an aerial view

When the aircraft eventually landed at Mahe at about 1pm local time, on a runway built on the shoreline of the beach, the full passenger load gave a thunderous applause for the beautiful touchdown and although not new but it is always an amazing sight when an aircraft lands by the side of the beach and there we started the short albeit beautiful adventure on this exotic fantasy island

The Seychelles International Airport, Mahe is the only international gateway to the island and they have flight services from (Ethiopian Airways) Addis Ababa, Ethiopia; Nairobi, Kenya; Dubai and Abu-Dhabi; United Arab Emirates; Doha, Qatar; and from Frankfurt with plans by British Airways to commence operations there next year.

The country has a visa on entry policy but anyone travelling to the country must have a valid passport, other travel documents recognized by the Seychelles authorities including for Nigerians, a valid yellow card.

After moving through immigration, we were met by our tour guide, Celisse Zelime of Mason’s Travel who began the interesting process of initiating us Nigerians into the world of the Seychelles Island.

Mason’s Travel being the oldest travel and tour agency, as old as the country itself which gained independence in 1976, has a lot of experience and our chaperone (Celisse) was able to lay it down on us and show us a lot in our brief stay.

First off, she explained that the Seychelles consists of about 115 islands in the Indian Ocean, off East Africa and according to her, each island has its own characteristics as they are home to many different beaches, coral reefs and nature reserves which consist of rare plants and animals like the giant Aldabra tortoise( which by the way I didn’t get to see).

However, she explained that of the 115 only a few of the islands are inhabited

The country, she said, is North -East of Madagascar with a population of about 96,000 who speak English, French and Creole as being taught in their schools.

Celisse further told our group that of the population about 90% are Roman Catholics, 6% are  while the other 4% consist of other religions.

According to her, the islands main income generator is from tourism with over 200,000 tourists visiting the country last year and an expected 300,000 this year since tourists who have visited have surpassed the 200,000 mark.

Showcasing some of the island nation’s sights, Celisse took our group to the capital and centre of the city, Victoria which was symbolized by the standing clock, the Tour de L’horloge symbolizing the city centre.

We had some fun at the beach that evening meeting different nationals and indigents who were quite friendly. The activities on the beach of the Savoy where we stayed were exciting as there were bonfires and dancing, there was a lot of buying and selling and different foods at the beach.

To round off the night, we had dinner on the beach at the BoatHouse, a beautiful boat-like restaurant facing the ocean which was great as the sea breeze and beautiful background music made the dinner worth every minute.
The next day, after an exquisite night at the Savoy, it was time to go into town and experience the island, its rich culture, its people, cooking and even the local distillery.

We passed through the church and the Hindu Temple and went into the market, the Sir Selwyn Selwyn-Clark Market where we saw a fantastic array of fishes for sale from the red snappers to baby hammer head sharks and other kinds of sharks and fishes for sale.

Fruits and vegetables too were on display including spices like garlic, ginger, turmeric, curry unfortunately it wasn’t the market day as Celisse explained, telling us that we would have been in for a sight if it was.

After moving around town and making various photo stops, we arrived at the local distillery, the Takamaka Rum Distillery and were shown how to extract the juice from sugarcane, ferment it for 48hours, heat it and cool it and the extract and add ingredients to make the rum.

‘Common people, we are Nigerians and we wouldn’t go into a rum distillery and not taste some rum….actually we tasted almost all the rum they had and our guide at the distillery just kept it coming.’

The Takamaka Rum distillery has a rich history behind it and was bought by the Seychelles authority and leased to some amazing folks who are doing good with the place not just making the best rum for consumption on the island and export but a nice olden-day restaurant with an incredibly powerful ambience.

From there it was off to lunch, which we did at Eden…the place was absolutely the best with all sorts of seafood and vegetable menu.

Eden was just fantastic and we had lunch with some of our hosts including Hilda Camille, senior Sales Executive Asia and Nicole St. Ange, the Group Branding & Communications Manager of Mason’s Travel…the meal was quite tasty and the conversation all round was great.

After lunch sadly it was time to zoom off to the airport to catch our flight, I particularly felt like staying further in nature’s island paradise not just because of the great weather or the amazing Seychellois people and cuisine but just because I couldn’t get enough.

I asked Celisse on the way to the airport back to Addis Ababa when it was the best time to visit and she graciously explained that the islands are warm all year long with a tropical climate and anyone looking for a good time or some relaxation can visit anytime of the year.

She also said there were various interests and that could also influence the right time to visit the Seychelles Islands, activities like the Subios Underwater festival or the Festival Kreol these kinds of activities can influence anyone’s timing of coming over.

For me, I just don’t care what time of the year I just have to make it here again even if it’s just to bask in the warm days sun on the beach or enjoy the night breeze or just come out of my room and look at the beautiful God-crafted topography or bird watch, anything so long as I revisit this island paradise of splendor and sheer magnificence .

Tags The Seychelles Islands: A little slice of heaven on earth

Nigerianflightdeck is an online news and magazine platform reporting business stories with a bias for aviation and travel. It is borne out of the intention to inform, educate as well as alter perceptions with balanced reportage.
Previous Emirates extends condolences to family of deceased passenger
Next NAMA tells airlines that navigational facilities are working optimally