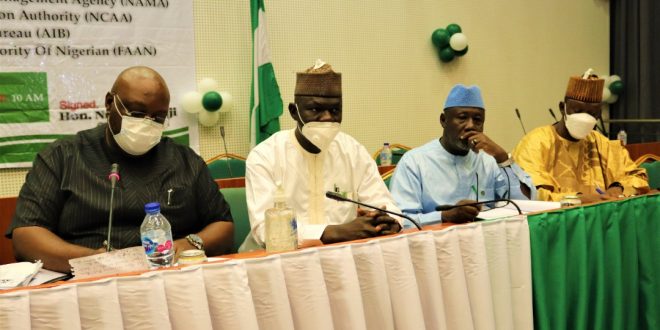 He was speaking at the ongoing House of Representatives Public hearing on aviation where he also critiqued the planned concession of four Nigerian terminals stating that it is wrong especially with a huge debt on the country.

Senator Adede who is owner of King Airlines gave his submissions on FAAN based on what he described as creditable reaction during and post-airline operations of the COVID-19 pandemic that is ravaging the globe.

According to him, agencies like FAAN, the Nigeria Civil Aviation Authority (NCAA) did well in the face of the novel virus especially on planning and implementation of safety guidelines for the country.

On the funding Adede said,” So, please Mr. Chairman I would like to plead  with you and by extension today thank you to the speaker  because we know how passionate he is about aviation so please we need to help this country and in doing so, I am asking the chairman to place emphasis  huge to extra budgetary allocations and to declare the aviation sector and FAAN in particular among the critical areas requires funding it is very important because as you know the airlines are unable to fly not because they don’t want to fly but there is still passenger apathy in flying even internationally, people are still scared of flying.

On the terminal concession, he said,”I know as a matter of fact that the remodeling of the airports were giving to the Chinese about five or six years ago for the sum of over $500million some of those building are not up to standard at all, they are below what the Chinese themselves build for themselves. How can you tell government to concession these buildings when there is a huge national debt on the country?”

He further made a passionate appeal to the committee on behalf of airlines that owe aviation agencies, asking for some debt waiver.

“I want to plead with your committee, the honorable minister and the agencies, I know the airlines are owing huge monies, if you can please find it in your heart to kind of waive some of these monies, it has to be airline by airline to help them because even if you give them any intervention fund, you give them on the left hand and collect it from the right hand.

We should look at how we can help  because the laws we do today are laws that are going to be for generations of aviators who will come in five, ten or fifteen years and we need to look at our laws critically and see how they will help us move forward.

Nigerianflightdeck is an online news and magazine platform reporting business stories with a bias for aviation and travel. It is borne out of the intention to inform, educate as well as alter perceptions with balanced reportage.
Previous Ojikutu canvasses dollar-equivalent airfares; proffers other tactics for domestic airlines’ survival
Next Reps resolute in bequeathing strong aviation sector to Nigerians