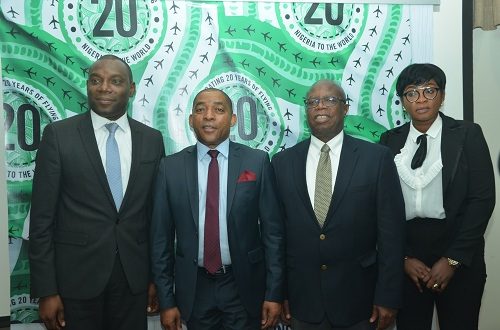 SAA to be profitable in 3years, GCEO assures as airline celebrates 20years flying into Nigeria

IN spite profitability difficulties it is currently undergoing, the Group Chief Executive Officer of South African Airways( SAA), Vuyani Jarana has assured that it would take the ailing airline three years from 2018 to 2023 to turn its fortunes around and get back to profitability.

Mr. Jarana gave this assurance today at the Eko Hotels and Suites where the airline marked 20years of seamless operations into Nigeria stating that the airline is re-engineering its strategy to enable it harness all it can within the region.

On its plan to get back to profitability, Jarana stated that the airline over the years had not lacked strategy stating that what has been missing is execution of said strategies and insisting that the management aims to implement the strategies to change the airlines fortunes.

According to Jarana, their strategy is hinged on revenue optimization, procurement as well as re-engineering the technical Organisation ( South African Technic) to make it better, more efficient and able to support more airlines apart from those of SAA.

He said,”there has been a number of initiatives and strategies developed in SAA to turn it around and any business if it is to succeed it has to be able to carry its operations and rely less on shareholders and capital injection. Of course, there is nothing wrong with share holder injection and capital calls it is normal in any business but the case of SAA has been slightly different. So, what we have been doing we have come in as new management and the big focus has been turning around SAA.

The starting point is if you look at SAA, SAA hasn’t lacked strategy and those strategies were not bad strategies if you read them but what has been missing is the implementation of the strategies. So if you write strategy and you do not implement it, you cannot achieve success, that’s the difference. The difference between the current board , it is the willingness to execute the strategies. Really rolling up your sleeves and getting things done.”

“Of course you tweak your strategy, the biggest dimension of strategy is timing so strategy is not static, it continues to evolve but if there is anything, it’s not necessary that the us too much new ideas, yes there are new ideas but that is not the difference the difference is the willingness to implement the strategy.”

He satiated that a lot of routes were in the negative profit margin and had to be pulled back as well as take out the fixed cost in the daily organisational program, onerous contracts the airline felt it could negotiate better, so they can return to profitability.

He however said that despite this SAA, needed to keep its eyes on the market and ensure that customers are satisfied and served better.

He said that was why the airline changed its aircraft

“We looked at our services and said, instead of flying two frequencies a day and making losses on both of them, consolidate it to one frequency and make sure you put great service onboard, command better margins so that customers will choose the SAA flight above other competitors, even if competitors but five, ten flights a day, the one we fly must be the most sought after and I think we are achieving that.”

Also speaking, Regional General Manager, Africa, Middle East and Indian Ocean island, Aaron Munetsi said SAA’s 20 year foray into Nigeria has been a mix of all but that the airline has airlifted over 3 million passengers since then.

He said the figure was low because when both countries entered into Bilateral Air Services Agreement( BASA) in 1998, the BASA was restricted to two frequencies each on either side and when it was increased two years later to four frequencies, there was a restriction for both countries to airlift 300 passengers weekly, he however said that has since been reviewed.

He also pointed out some challenges that made business difficult to run, not just in Nigeria but Africa in its entirety using the issue of fuel cost as an example.

Operations between Johannesburg and Africa’s most populous city, Lagos, Nigeria, commenced on 4 December 1998 as SAA launched its first flight into Nigeria soon after the Bilateral Air Service Agreement between the two countries had been signed.

SAA has since brought several aircraft onto this route, from the initial Airbus 300 series, which had to make a technical stop en-route in Luanda to the Boeing 767 and the B747-400 and to the Airbus A340–600, which was then replaced by the current state of the art Airbus A330-300 aircraft.

“The Nigeria operations rank amongst SAA’s most profitable and we want to continue to support this important destination by continuously improving the overall customer experience and exploring new opportunities. This will enable us to retain our market position as the carrier of choice amongst the Nigerian travelling community. Our understanding of our customer profiles who travel in both business and economy class cabins, is one of the reasons we decided to deploy the A330-300 aircraft which responds well to the needs of this market,” said Pumla Luhabe, SAA General Manager Commercial.

With its thriving economy, Nigeria is Africa’s economic powerhouse; Lagos is a high-energy city famous for its vibrant lifestyle, set against the backdrop of the Nigerian film industry, Nollywood, and their world-renowned music industry bolstered by heavyweights such as the late legendary Fela Anikulapo Kuti to the modern-day Davido, DBanj, and Psquare to mention a few. Nigeria offers numerous commercial opportunities and a cultural experience like no other.

“Nigeria is among the top destinations to which we fly, and over the past 20 years SAA has transported over three (3) million passengers into the region and we will continue to listen to our customers to ensure we are providing them with the best possible service for continued loyalty. Reinforcing our legacy of exceptional service, SAA was recently voted Best Airline Staff in Africa at the World Aviation Awards,” concludes Luhabe.

Tags SAA to be profitable in 3years; GCEO assures as airline celebrates 20years flying into Nigeria

Nigerianflightdeck is an online news and magazine platform reporting business stories with a bias for aviation and travel. It is borne out of the intention to inform, educate as well as alter perceptions with balanced reportage.
Previous International Operations: Air Peace scales safety test for B777 operations
Next Tony Elumelu Foundation opens 5th Entrepreneurship Programme application cycle on Jan 1st , 2019