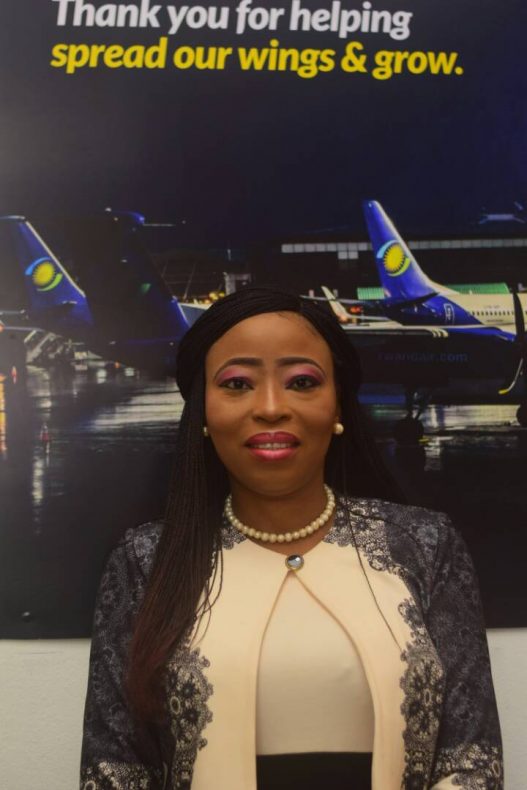 RWAND AIR at the weekend flagged off its Abuja/ Kigali flights offering passengers from Nigeria’s political capital opportunity to connect to its global route network.

This is in addition to the daily Lagos /Kigali flight separately operated by the East African Carrier.
The four weekly service according to its Country Manager, Ms Ibiyemi Odusi, will now provide opportunity for government officials, members of the diplomatic corp and other players in the public and private sector to connect flight from Abuja directly to other routes on the airline’s network.
Speaking at the inaugural flight in Abuja on Friday, April 27, 2018, Odusi said the new flight is positioned to allow Nigerians have more travel options from the nation’s political capital to destinations flown by Rwand Air.
Odusi said Nigerian passengers will benefit from the route network flown by Rwand Air from Abuja.
She said with right product pricing , scheduling planning and other unique selling points at the disposal of Rwand Air, it intends to grow traffic on the route to about 80 per cent Load Factor in the next six months.
Odusi said since about 2012 when Rwand Air started operations in Nigeria, it continues to consolidate from its hub in Kigali to Dubai, Johannesburg, Nairobi, Entebbe, Dar es Salaam, Accra, London, Brussels and other routes on its network.
She said the Abuja / Kigali four weekly flights will open vistas of opportunity for passengers who want to connect to many parts of the world by leveraging on the carrier’s on time performance, IOSA safety record, international certification, excellent inflight entertainment, customer service, competitive fares and other comparative advantages.
She also thanked the Minister of State for Aviation, Senator Hadi Sirika, the Nigerian Civil Aviation Authority (NCAA), Federal Airports Authority of Nigeria (FAAN) and other top government officials for making the day’s inaugural flight a success.
Also speaking, Rwanda’s High Commissioner to Nigeria, Ambassador Stanislas Kamanzi said the extension of flight service between Abuja and Kigali will boost trade relations between the two countries.
He said the Abuja / Kigali service will now provide seamless travel window for diplomats and government officials, investors and private sector players who want to explore opportunities for trade, commerce and other bilateral activities.
Kamanzi lauded aviation and diplomatic authorities for granting the right permits and approvals that has led to the consolidation of flights between the two countries.
Also speaking at the event, International Terminal Manager, Federal Airports Authority of Nigeria (FAAN), Abuja Airport, Hajara Musa assured that the authority will assist Rwand Air in every area that will make its operations smooth.
She said FAAN will continue to provide the necessary facilities that will make the airline have seamless services out of Abuja Airport as it continues to do for all airlines.
She said FAAN is poised to ensure the partnership with Rwand Air is a win – win for travelers .
Captain Sam Masaba, the pilot in command of the Boeing 737- 700 aircraft said he was excited to fly Rwand Air passengers into Abuja from Kigali.
He described Abuja as home to him, having flown for two Nigerian carriers.
The Boeing 737-700 aircraft with registration number 9XR- WJ landed at the runway of Abuja Airport about 1.25 pm and was treated to a ceremonial shower welcome by two fire tenders operated by personnel of FAAN aerodrome fire rescue and safety services to the excitement of airport workers .
Officials of FAAN and Nigerian Civil Aviation Authority ( NCAA) were also on hand to receive the aircraft and its crew, led by the Airport Manager, Alhaji Sanni Mahmud.
Trade partners, Corporate Clients, Government Officials & Private Partners also attended the inaugural flight ceremony.

Nigerianflightdeck is an online news and magazine platform reporting business stories with a bias for aviation and travel. It is borne out of the intention to inform, educate as well as alter perceptions with balanced reportage.
Previous Manpower development: Ethiopian Airlines partners with Aviators African School Club
Next AMCON says it is willing to exit indebted firms if…