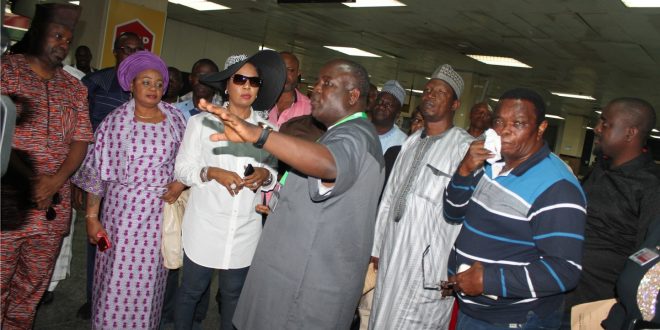 AFTER inspecting pace of work at the new international terminal of Murtala Muhammed International Airport, Lagos, construction handled by the Chinese Civil Engineering Construction Company (CCECC), the House of Representatives Committee on Aviation expressed fears that the project will not be complete by December as promised.

This is just as the committee Chairman, Hon Nkieruka Onyejocha said that concession was not the way to go and that the house will call for a public hearing with stakeholders to discuss the proposed concession of some airports in the country.

The committee stand was made after their on the spot assessment of projects ongoing and completed at the MMIA after they had met the Nigeria Civil Aviation Authority (NCAA) and the Nigeria Airspace Management Agency (NAMA) earlier during oversight visit on aviation agencies and tour of airport facilities.

According to Hon Onyejocha because of the loan Nigeria accessed from China to embark on this terminal construction, the need for haste to complete the project was important as the Chinese would want to get repaid as soon as possible.

She said:” They said they won’t be able to deliver by December but I want them to know that they should understand that we took loan to build this and the Chinese government is not going to wait for us because agreements have been signed.

“So the repayment period would start when it would start unless they go back to drawing board to renegotiate and you know we have three other terminals that we are hopeful would be delivered by December and so what it simply means is that Lagos is lagging behind and we would take it seriously.”

On the issue of concession, she said that a public hearing to get the input of industry players would be called but said her personal view is that concession may not be the best way to go by giving out airports that are yielding revenue to government.

she said :” I am one person who don’t believe that we should concession the four major airports that we have because I know it is those four airports that are funding the other 18 international airports and of course you have to look at the issue of workers and of course the Nigerian people as a whole.

” If we concession them and people are going to make money and be okay, why can’t we do it?

“Having said, I also know that we are going to conduct public hearing where we would take all the issues together, where we would be able to ask Nigerians and of course the key players in aviation industry; the stakeholders including the workers, the press to tell us what you think.

“We would also look at the issues of the concession that has been done in the past. We have to evaluate. How has it helped, how did we do it? Did we get any benefit from it? And if we have, then we see where we are going to do the same. If we have not, then why? What are we going to do differently? ”

So I believe that very soon by next week Nigerian people are going to talk to us on the issue of concession. I don’t want it to be my personal opinion.

Nigerianflightdeck is an online news and magazine platform reporting business stories with a bias for aviation and travel. It is borne out of the intention to inform, educate as well as alter perceptions with balanced reportage.
Previous Unrest brewing in Shasha, environs over protracted power outage
Next Sirika gets Central Bank to include airlines in forex settlement