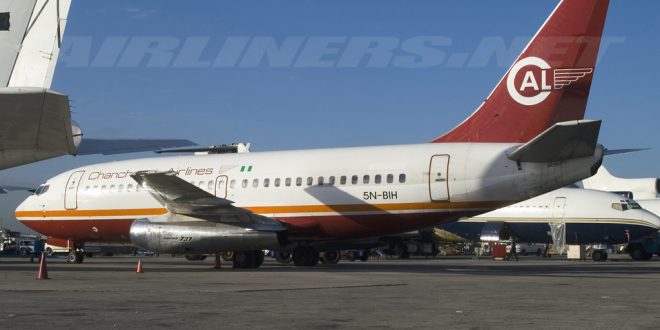 DOCUMENTS uncovered by Nigerianflightdeck.com is pointing to alleged irregularities with the renewal of Air Operators Certificate (AOC) of Chanchangi Airlines Limited by the agency in charge, Nigerian Civil Aviation Authority (NCAA).

However, the NCAA has refuted any claims of such irregularities or wrong doing for that matter stating that AOC of Chanchangi is invalid as it speaks following the fact that it has been revoked having not operated at all over the time.

The Document had that the AOC is valid from 5th February, 2017- to 4th February, 2019 for Passenger and Cargo however the CAA said as at the time of that renewal the airline, Chanchangi, was still doing cargo and when it no longer had the aircraft to continue that operation, its AOC was suspended after three months.

The AOC read,”Please find enclosed, a copy of your renewed Air Operators Certificate (AOC) for your retention.
Your AOC becomes invalidated if you fail to comply with the relevant Nigerian CARS and may be amended in accordance with the provisions of Part 9.1.1.9. We therefore urge you to ensure that the management and staff of Chanchangi Airlines ensure strict compliance with all regulatory requirements at all time. Accept the assurances of our highest regards”

Recall after a series of incidents Chanchangi which for long operated with one aircraft had its AOC suspended by the Nigerian Civil Aviation Authority (NCAA) following a memo signed by the then Director-General of the NCAA, Captain Fola Akinkuotu, dated October 14, 2013 ordering all scheduled airline operators whose fleet size had been reduced to only one operational aircraft to immediately stop flight operations.

NCAA Spokesman, Sam Adurogboye who reacted to the allegations as inquired from our correspondent explained that as at the time the AOC was renewed, Chanchangi Airlines was still operating cargo services and so the airline’s AOC was renewed.

He however explained, as regards regulations, Chanchangi did not operate for three months and so the said AOC was revoked and withdrawn.

” Chanchangi was already an operator and so renewal of the AOC was based on when they were doing cargo operation. NCAA would never give AOCs to any airline undeserving. The airline is not flying as we speak because according to regulations they did not comply with all regulatory requirements at the time.”

Nigerianflightdeck is an online news and magazine platform reporting business stories with a bias for aviation and travel. It is borne out of the intention to inform, educate as well as alter perceptions with balanced reportage.
Previous SAHCOL manufactures first fuel bowser from locally sourced materials
Next NAHCO appoints Oladapo Chairman, Oluwatoyin Non-Executive Director