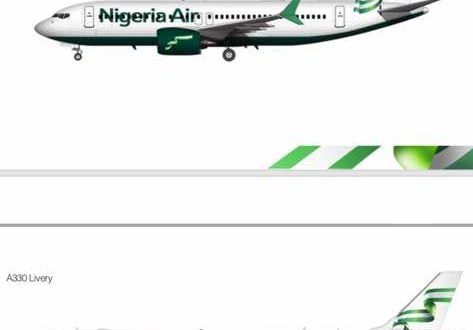 How Nigeria Air aircraft will look in its livery

REACTIONS have started trailing yesterday’s Federal Executive Council (FEC) suspension of the National carrier project, Nigeria Air which was scheduled to birth in December 2018 following moves by Minister of State, Aviation, Hadi Sirika to give the national carrier a rebirth.

This is just as pensioners of the liquidated Nigeria Airways have expressed hope of payment stating that the suspension of the new airline may be a new twist but should not affect their payment 14 years overdue.

Sirika had disclosed the indefinite suspension of the project noting that the decision to suspend the project was strategic and had nothing to do with politics or pressure from stakeholders.

On his twitter account, Sirika posted,”I regret to announce that the Federal Executive Council (FEC) has taken the tough decision to suspend the national carrier project in the interim. All commitments due will be honoured. We thank the public for their support.”

Reacting to the suspension, President of the National Association of Aircraft Pilot and Engineers (NAAPE), Engineer Abednego Galadima expressed some disappointment at the suspension stating that the project would have provided employment for Nigerian pilots and engineers .

He however said NAAPE was all for due process and transparency and urged that it be followed if the project is to recommence.

‘ It’s dashed hope for us at NAAPE and I hope government will reconsider as the project would have jump started a lot in the industry and provide fleet for our pilots and engineers to be employed on.”

” We are always for due process and transparency, We hope the Minister finds time to explain everything to stakeholders and we hope government reconsiders as soon as possible,” Galadima said.

Also in his response, the Secretary General of Association of Nigeria Aviation Professionals (ANAP), Comrade Razaq Saidu said he has been vindicated stating that the Minister had no the moral justification to forge ahead with Nigeria Air.

He explained that the Minister of State(Aviation) Hadi Sirika got it wrong from the on set without calling for public bidding from interested technical partners for the rest 95% stake since he claimed that 5% stake would be owned by the Federal Government.

Saidu urged the minister to go back to the drawing board by first settling the ex workers of the defunct Nigeria Airways before embarking on any other aviation projects.

He described as a waste the £8million purportedly used to unveil the logo of Nigeria Air in far away Farnborough, London and not allowed the supposed technical partners who are to own majority shares decide on the logo and the name.

A pensioner with the defunct Nigeria Airways that has been at the forefront of agitations, Engineer Lookman Animashuan, who spoke to Nigerianflightdeck.com said that the suspension of Nigeria Air is a thing but should not affect the ex-workers’ payment

“This is a new twist as Federal Government had hinged payment of our people before the commencement of operations of Nigeria Air. However, national carrier or no has nothing to do with the payment. As you are aware this issue has been over 14 years. The good development is that we met with the Minister of Finance and she said she will do something about it. in fact there and then she started making calls and she promised she will get back to us.”

” On the Minister of Strate, Aviation, he has been occupied with this national carrier project but with its suspension yesterday, he will have time for us and other things. So suspension or not is not the issue,” he said.

Nigerianflightdeck is an online news and magazine platform reporting business stories with a bias for aviation and travel. It is borne out of the intention to inform, educate as well as alter perceptions with balanced reportage.
Previous FG suspends project ‘Nigeria Air’
Next Usman, NCAA DG reacts to Topbrass aircraft deregistering brouhaha