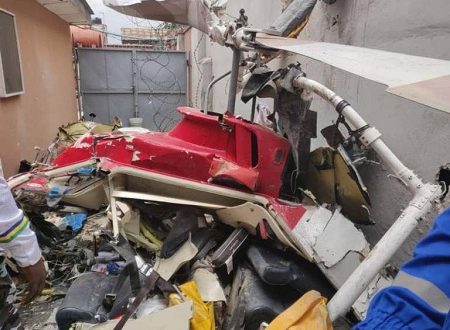 A  Helicopter,  now identified as belonging to Quorum Aviation Limited some minutes after noon crashed into a building in Opebi area of Lagos State and two people have been reportedly killed while another is in Intensive Care Unit of the Lagos University Teaching Hospital (LASUTH).

The helicopter, Bell 206 with registration number 5N-BQW from Port Harcourt crashed into a building,  no 16 A Salvation Road, Opebi, Ikeja.

Director General, LASEMA, Dr. Femi Oke-Osanyintolu who has confirmed the casualties said the helicopter was carrying three people, and that one was in the intensive care unit at the Lagos State University Teaching Hospital while the other two were killed on impact and there bodies had been deposited in mortuary … more details later

Nigerianflightdeck is an online news and magazine platform reporting business stories with a bias for aviation and travel. It is borne out of the intention to inform, educate as well as alter perceptions with balanced reportage.
Previous Ethiopian expands Bole International Airport, unveils new aviation infrastructure
Next Updated: AIB commences investigation as Quorum Aviation gives details of crashed helicopter