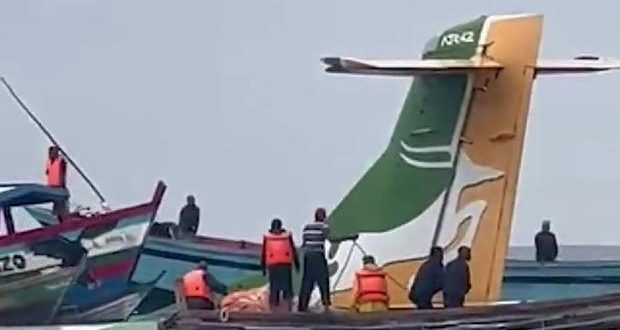 Tanzania’s Precision Air, ATR-42 with registration 5H-PWF Sunday morning ditched into Lake Victoria on approach to runway 31 at Bukoba airport (HTBU) from the financial capital, Dar es Salaam killing 19 of the 43 passengers on board.

Twenty-six of the 43 people on board were initially said to be rescued and sent to hospital.

The crash, which happened around 08:30 local time (05:30 GMT), has been blamed on inclement weather but the rain has stopped, allowing rescuers to reach the crash site.

Rescue workers and local fishermen are still trying to reach those still trapped.

Emergency workers have used ropes to pull the ATR-42 aircraft closer to the shore, and some of the plane’s body is now above the water.

Immediately after the crash, the plane was almost completely submerged with only the brown and green tail fin visible.One end of the runway at Bukoba airport lies right next to the shore of Lake Victoria, Africa’s largest lake.

Reports state that the airport has been closed until further notice.

Precision Air is Tanzania’s largest private airline and is partly owned by Kenya Airways. It was founded in 1993 and operates domestic and regional flights.

Nigerianflightdeck is an online news and magazine platform reporting business stories with a bias for aviation and travel. It is borne out of the intention to inform, educate as well as alter perceptions with balanced reportage.
Previous Dana Air resumes November 9th, thanks customers for unwavering loyalty
Next IOM, NIS partner to raise awareness on SoM, TiP across Nigeria