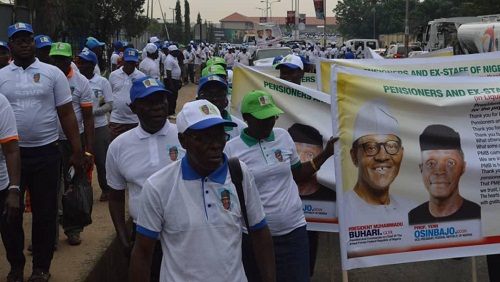 MINISTER of Information; Alhaji Lai Mohammed has said that ex- workers of Nigeria Airways and next of kins of deceased former staffers  are not the only set of beneficiaries that the Buhari-led administration is ensuring that they get their benefits after many long years of being in the doldrums.

This is just as ex- workers of Nigeria Airways questioned the morale behind those criticizing their actions for support President Buhari’s re-election, asking if they were in the same precarious situation for 14 years, if they would not support those who promised to support them and delivered.

The Minister who was speaking at a rally organised by ex-staff of the defunct national airline, Nigeria Airways to show support for the President Muhammadu Buhari- led administration said other beneficiaries that have benefited from this government’s compassion included ex-Biafra police, ex- workers of the Nigerian Telecommunications (NITEL) as well as workers of the Ajala Delta Steel Company.

According to Mohammed, it was sad that successive governments have ignored the plight of these people and reduced their dignity, leaving them in abject poverty.

“This administration’s commitment to the welfare and wellbeing of Nigerians led President Muhammadu Buhari to end the 14b-year wait and suffering of 5,996 former staffers of Nigeria Airways, who have started receiving payments of their pension arrears and other benefits from government.”

“ It Is noteworthy that since liquidation of Nigeria Airways, successive administrations have failed to settle the ex-staffer, leading to untold suffering and loss of human dignity by affected people.’

He said, “It is not just former staffers of Nigeria Airways who have benefited from the people-oriented policy of this administration as former Biafran policemen, former workers of Aladja Delta Steel Company and former Nigerian Telecommunications (NITEL) workers have also seen their years of suffering and neglect come to an end thanks to President Buhari.”

“For over 800 deceased ex-staff of Nigeria Airways, their next of kin will also receive the entitlements due to them.”

Meanwhile, hundreds of ex-staff of the defunct national airline, Nigeria Airways traversed the Murtala Muhammed Airport, Ikeja resolving that they would support the President Muhammadu Buhari- led administration in the upcoming elections come what may but stated that no member is being coerced to support the Incumbent as support is being given freewill.

The workers who questioned the morale behind those criticizing their actions, asking if they were in the same precarious situation for 14 years, if they would not support those who promised to support them and delivered.

Co-ordinator of the Ex-pensioners’ rally and former President of Aviation Union’s Grand Alliance (AUGA), Engineer Lookman Animashuan told Nigerianflightdeck.com in an interview that the rally was a reactionary support for the humanitarian gesture of this administration, stating that people can say whatever they want but where was all other administrations when they wallowed in neglect and poverty.

Engineer Animashuan said, “We are not coercing anybody to join the rally; people are doing so of their free will. Nobody can stop anybody’s payment. People talking like that are myopic. Me I can’t stop anyone’s payment, it’s already there and they have got 50% and they are no more doing verification anyway so the moment the other one is ready it will be sent to their accounts and so it is not true.”

On those criticizing their action, he said,” Those people talking so are wailers; they will never see anything good in anything. They should put themselves in our shoes and after 14 years if they haven’t been collecting salaries, if about 800 members and family members have died because of neglect they will not be talking the way they are talking.”

“We are celebrating President Muhammadu Buhari, we are happy for him, he has shown that he is a father of the nation, particularly to pensioners and ex- workers of Nigeria Airways n because for 14 years we were humiliated, we were neglected and he promised that if he is elected he will start to pay and he has started paying. He has approved 50% and the final set of people are collecting as we speak and also he has promised that in the next six(6) months he will pay the balance. And 6 months is just around the corner and we believe him most especially as the money is in the budget.”

Joined by other unions in the industry like the Air Transport Senior Staff Services Association of Nigeria (ATSSSAN), National Union of Air Transport Employees (NUATE) the teeming crowd sang the praises of the president commending him for their payment and giving them back their dignity as men and women who had worked for the country.

Nigerianflightdeck is an online news and magazine platform reporting business stories with a bias for aviation and travel. It is borne out of the intention to inform, educate as well as alter perceptions with balanced reportage.
Previous ’10 year validity passport is a choice,’ immigration boss explains
Next Onyema honours pioneer manager, charges aviation staff to imbibe hard work