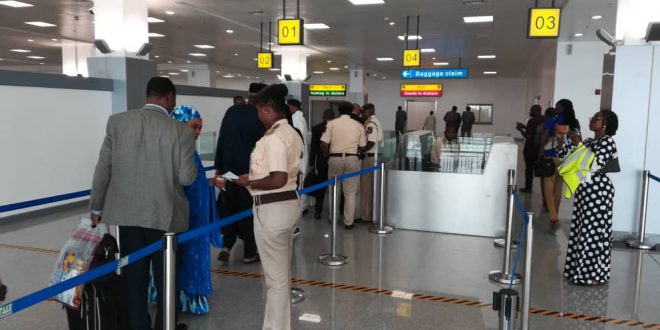 THE just commissioned new international Terminal of the Nnamdi Azikiwe International Airport ( NAIA) was put to use this evening for its inaugural flight as Togolese airline, ASKY today arrived with its Boeing 737 aircraft.

Passengers of the airline were happy arriving at the new terminal and described it as the result of what the nation can do when it sets it mind to achieving it.

The airline arrived Abuja Airport in Nigeria with 91 passengers and six crew and were processed through the Nigeria Immigration Service Counters before proceeding to baggage claim to get their luggage.
According to a traveller, the terminal performed optimally to the praise and adoration of many.

He said the terminal was truly magnificent and could not wait to arrive Lagos in such a structure.

“In fact, this is beautiful, truly magnificent, the man who simply identified himself as Noah said,” This is truly fine and there are no hassles, everything is as an airport should be. we should continue to have more of this.”

A feminine traveller told our on ground source,” This is so beautiful, even the pictures here are amazing as the terminal is sparkling,. I pray we are able to sustain this because this is indeed one of the best terminals I have been to”

A close source told Nigerianflightdeck.com that operations in and out of the terminal has kicked off and they are expecting more airlines that start coming in.

Recall, NAIA was commissioned by President Muhammed Buhari on December 22, 2018 stating that government remained committed to make Nigeria, a regional headquarters for aviation.

NAIA is among the four terminals covered by the $600 million loan funded by the Chinese Exim Bank (US$500 million) with(US$100 million) counterpart funding from the Federal Government of Nigeria.

All four terminals are expected to be complete in 2019.

Nigerianflightdeck is an online news and magazine platform reporting business stories with a bias for aviation and travel. It is borne out of the intention to inform, educate as well as alter perceptions with balanced reportage.
Previous GAT records 228, 239 passenger traffic in December
Next Air Peace launches direct Lagos- Banjul flights, increases Accra service