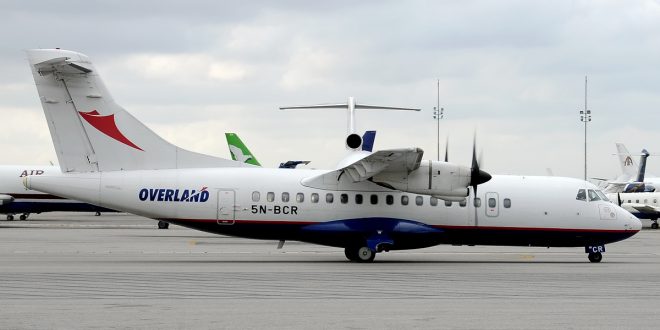 OVERLAND Airways, has announced the start of its flight services from Abuja to Asaba, Delta State from October 31, 2017.

The flight services will be operated with Overland Airways globally renowned ATR turboprop aircraft with superior technological design for unmatched performance on short-distance flights in terms of economic reliability, safety and comfort.

Overland Airways fills the gap in flight connectivity between Asaba and Abuja, thereby easing the inconvenience of passengers faced on the route and providing strong support to the economy in Delta State and surrounding regions.

According to Capt. Edward Boyo, Chief Executive Officer (CEO) of Overland Airways, the economic recovery in the nation requires strong commitment among all stakeholders to reinvigorate the economy. Moreso, the accelerated development of the economy of Delta State is strategic to the development of  the economies of various regions in the country especially the South-East and South-South regions, which makes air transport an important element for the development Delta State.

“Delta State is endowed with great human and other resources which should be carefully harnessed by both the government and the private sector. Overland Airways is dedicated to creating new high-value for the indigenes and visitors to Delta State by providing our trademark excellent, reliable, safe and comfortable air services to Asaba.”

“We understand the value of investments and easy access into hinterland economies like Delta State. And we are confident of driving sustainable social and economic development in Delta State as Overland Airways supports the easy movement of investors, tourists, traders and business people to and from Delta State and the adjoining regions such as Onitsha across the Niger. We are in partnership with the people of Delta State. And this is a partnership that works.”

The Chief Operating Officer of Overland Airways, Mrs. Aanu Benson, states: “Overland Airways performed the first-ever flight which opened Asaba Airport in 2011 as a foremost partner in the economic transformation of Delta State, and in celebration and support of the enterprising people of ‘The Big Heart’ State. The launch of the Asaba-Abuja flights demonstrates the renewed bonding Overland Airways brings to the people of Delta State and its environs, underlain by Overland Airways’ characteristic people-oriented flight services.”

“With a modern fleet of 10 aircraft, superior technical and management capabilities as well as unmatched commitment to the sustainable development of Nigeria’s remote economies and airports, Overland Airways is one of the best airlines in the world today. And this is another plus for Delta State and its environs.”

Nigerianflightdeck is an online news and magazine platform reporting business stories with a bias for aviation and travel. It is borne out of the intention to inform, educate as well as alter perceptions with balanced reportage.
Previous What you need to know about Emergency Exit seats on aircraft
Next NAAE assures airspace users on functionality of NAVAIDS