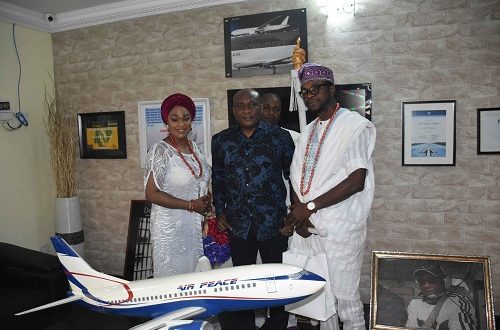 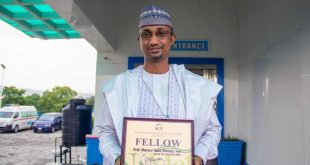 OONI of Ife, His Imperial Majesty, Adeye Enitan Babatunde Ogunwusi, Ojaja II has commended the Chairman/Chief Executive Officer of Air Peace, Mr. Allen Onyema for his tireless contributions to the economic development and peace of the South West Region and Nigeria as a whole.

Speaking during a visit to Air Peace Corporate Headquarters in Lagos on Wednesday, the Ooni assured Onyema that the Yoruba were deeply appreciative of his role in the development of their land.

The monarch, who was represented by two of his Cultural Ambassadors, Alfred Oladotun Taylor and MorounRanti Ashabi, presented prized Ife artwork and other special gifts to the Air Peace boss as a “sign of my heartfelt appreciation of your person and your contributions to the throne of Oduduwa.”

The artwork presented to Onyema, Ambassadors Taylor and Ashabi explained, signified the depth of the Ooni’s recognition of the Air Peace boss’ contributions to the development of the Yoruba nation. They described the gift as one of the most prized assets of Ife.

For his part, Onyema said the Ooni’s gesture was a challenge to continue to work for the development and peace of the Yoruba nation and the country as a whole.

He expressed gratitude to the royal father for recognising excellence beyond ethnic considerations, urging Nigerians to emulate the Ooni’s example to guarantee the oneness, peace and development of the country.

Air Peace, he said, was established to create massive job opportunities, seamlessly connect business and leisure travellers to their destinations and ensure that the country was adequately represented in the global aviation community.

Air Peace currently operates into and out of 14 domestic and five regional destinations, including Accra, Freetown, Banjul, Monrovia and Dakar. It is also concluding the process of launching its long-haul flights to Dubai, Sharjah, London, Houston, Guangzhou-China, Mumbai and Johannesburg.

The carrier, which recently penned a deal with American planemaker for the delivery of 10 brand new Boeing 737 MAX 8 aircraft, is now the biggest airline in West Africa.

Nigerianflightdeck is an online news and magazine platform reporting business stories with a bias for aviation and travel. It is borne out of the intention to inform, educate as well as alter perceptions with balanced reportage.
Previous NAHCO Plc announces new group structure, appoints Fagbemi new GMD/ CEO
Next Airport workers make case for casual employees in FAAN