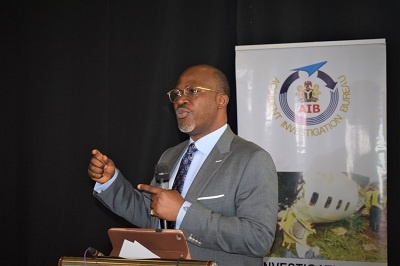 This is just as he revealed that before the advent of the corona virus pandemic, Nigerian aviation industry contributed at least $1.7 billion and created 341,000 direct jobs to the country’s Gross Domestic Product (GDP).

The AIB helmsman made this known while presenting a paper: ‘Best Practices in Civil Aircraft Accident Prevention and Investigation for Sustainable Development of the Transportation and Tourism Industry,’ at the 2020 National Tourism and Transportation Summit and Expo 2020, held in Abuja on Monday, noting that the pandemic setback the country’s aviation industry.

A statement by Mr. Tunji Oketunbi, the General Manager, Public Affairs, AIB said that Olateru was represented at the occasion by Capt Dayyabu Danraka, Director of Operations.

Olateru insisted that air transport was part of a broader travel and tourism sector, widely recognised as world largest industry.

He emphasised that the industry, according to the World Bank Group, was an important enabler to achieving economic growth and development.

Olateru declared that air transport and tourism complement each other, pointing out that tourism depends on transportation to facilitate the movement of visitors, while transportation industry depends on tourism to generate revenues for its services.
According to him, the $1.7 billion and 241,000 figures were presented by the International Air Transport Association IATA), recently.

Olateru, further described air accident and serious incident investigation and timely release of safety reports as catalyst for sustainable development in the air transportation and tourism industry in the country.

Olateru observed that, no matter what transport mode is, accident always erode the public’s confidence in the safety of the transport system, explaining that accident could lead to injury or death and could cause environmental and economic disaster.

He insisted that independent investigations into causes of accidents and major incidents helped to prevent tragedies and accident recurrence, thereby playing an important role in improving transport safety and bringing back the public confidence in transportation, leading towards sustainable development of transportation and tourism industries.

He explained that AIB had consistently carried out its duties in of accident and serious incident investigation in line with the International Civil Aviation Organisation (ICAO) Annex 13, but informed that a Draft bill to establish a multimodal transportation safety investigation system had passed the second reading at the National Assembly.

Nigerianflightdeck is an online news and magazine platform reporting business stories with a bias for aviation and travel. It is borne out of the intention to inform, educate as well as alter perceptions with balanced reportage.
Previous Governor Ortom, Benue indigenes welcome Air Peace’s inaugural flight to Makurdi
Next FAAN remits N2bn to CRF, recover N5bn as Reps urge agency to focus 70% of reserves on infrastructure