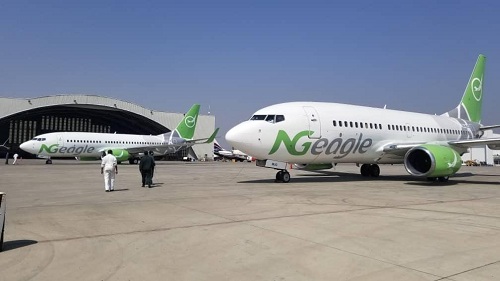 LEADERSHIP of the National Union of Air transport Employees (NUATE) have declared that if the Asset Management Company of Nigeria (AMCON) refuses to discuss the fate of the airline workers with the union, its new entity NG Eagle will not take off.

This is just as the union has said it is ready to picket Arik Air for three months if need be, until AMCON see reason to address the plight of Arik workers.

Comrade Ben Nnabue, the National President of the Union made this known today in a congress organized in front of Arik Air Aviation Center to chart a way forward for staff of the airline especially with alleged plans to move most to the new entity NG Eagle.

He said, “People don’t value their workers. I’m always saying this before management in any organization there are two components to every organization. One are the material assets and the other is the human resources assets but we live in a country that people seem to be valuing their material assets over human resources assets, it’s very painful because without labor the machines cannot work, without us there is nothing you can achieve, in fact it is labor that build the machines they are valuing more than us.

“Something is definitely wrong; we will fight this battle to finish. You see, in NUATE we believe in one thing, not in stories or love letters; we believe in action.  We will declare strike in Arik and if they don’t resolve the problems of the workers a new airline will never come.

“That is how we’d go, go and tell them to be ready. We went to ASL and did picketing for 24 days nonstop, Arik, we will do it for three months non-stop till the mandate of the workers come to be, they must work with us, they must tell us what they will do with our members.

Giving more depth to the issue, General Secretary, Mr. Ocheme Aba explained that as an aviation trade union, NUATE considers the unveiling of the NG Eagle, a positive and welcome development as the new airline would normally create job opportunities, provide incentives for deeper business penetration and generally widen the Nigerian aviation horizon.

He however expressed misgivings concerning NG Eagle due to AMCON’s evasive tendencies on the one hand, and Arik Air’s unrelenting penchant for courting crisis on the other hand, as well as severally demonstrated lack of capacity/disdain for labour relations practice.

He also questioned what becomes of Arik staff that had been home since the start of the covid-19 pandemic in March earning 20% of their take and those declared redundant.

Ocheme stated,” We decipher that AMCON’s unstated objective is to open a window of business opportunity as a way to recoup its heavy financial losses through the heavy debts in Arik and Aero. But, surely NUATE can’t be the only ones wondering what sort of business ingenuity there could be in running three airlines simultaneously.

“We have it on good authority that AMCON’s real intention is to sidestep the debt overhang, particularly in Arik air, while continuing to make money from the airline business without any real capital injection. This it intends to achieve by moving all valuable assets of Arik Air, including human asset, into the new NG Eagle. The questions are, what becomes of the carcass of Arik Air and its personnel after such evil wind?”

“Presently, AMCON has already moved some Personnel of Arik Air to NG Eagle while being loudly silent on the service records of such personnel in Arik Air. What happens to the previous years of service or how assured is the security of such service in their new assignments? Or, shall such service be in vain?

Nigerianflightdeck is an online news and magazine platform reporting business stories with a bias for aviation and travel. It is borne out of the intention to inform, educate as well as alter perceptions with balanced reportage.
Previous Arik CEO appeals to FG for more funds injection, foreign exchange availability for airline
Next Military thwarts attempted abduction at Kaduna Airport as bandits attack again