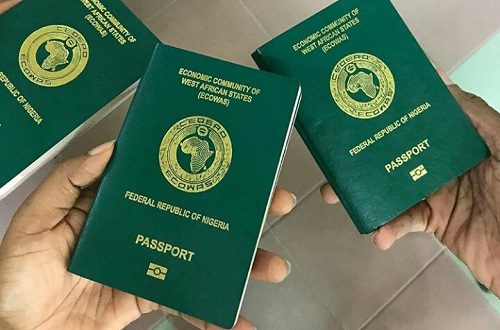 Worried about the humongous amount of unclaimed passport booklets across the nation, the Nigerian Immigration Service ( NIS) has embarked on a sensitisation drive to get Nigerians to shun the use of third party to apply for their passport documents as that is the major cause of the uncollected booklets.

He made this known at the Passport Office Alausa during a fact finding visit while also paid a visit to the Murtala Muhammed International Airport Command of the service where the Comptroller, CIS Adeola Adesokan revealed plans to improve on facilitation at the gateway.

The ACG who spoke after inspecting activities at Alausa cautioned applicants to shun the use of third parties to apply for their passports as those people do them a disservice by not filling in their accurate details especially phone numbers and email addresses and so when it is time to contact the applicant, there is no communication.

Usman explained,”Why we are here is a directive from the Comptroller General and has observed that there are a lot of uncollected passports in all the passport offices and we have about 100,000 passports unclaimed and apart from that , we still have about 40000 passports produced recently, unclaimed.

” This thing is causing us worry because once you’ve done your own bit and people have not collected it, it causes worry and it’s based on this that we are not there yet. That is why the CGI set up the committee to make sure the unclaimed passports are clearly given to the owners. And again, we came into the field and were able to understand why some were not claimed.

“What are the reasons why we have done the passports and collection has not happened? Before production was the issue due to various factors but now, it is no longer an issue, collection has become the issue now. The reason why passports are not collected are due to unreliable data.

Usman called on applicants to fill their forms by themselves and provide the right details  assuring them that they would get their passports as the process is not cumbersome.

Usman also visited the MMIA Command of the Service where the Comptroller, CIS Adesokan hinted him on what they hope to accomplish in terms of facilitation in the new year, she equally gave a breakdown of 2022 in terms of passengers facilitated and revenue generated.

According to Adesokan, everyday no fewer than 3000 passengers  were handled  and the number doubled during the festive period all done with limited counters especially during peak periods.

She also told the CGI that there are plans to digitalise the clearance system so arriving passengers do not have to come to the airports to start filling their clearance forms but have done it on their phone from the comfort of their homes and it can be synchronised through a QR Code.

Nigerianflightdeck is an online news and magazine platform reporting business stories with a bias for aviation and travel. It is borne out of the intention to inform, educate as well as alter perceptions with balanced reportage.
Previous Airside safety: Seeking practical solutions to aircraft, and vehicle collisions
Next WMO appoints Dr. Kijazi as new director, RAF