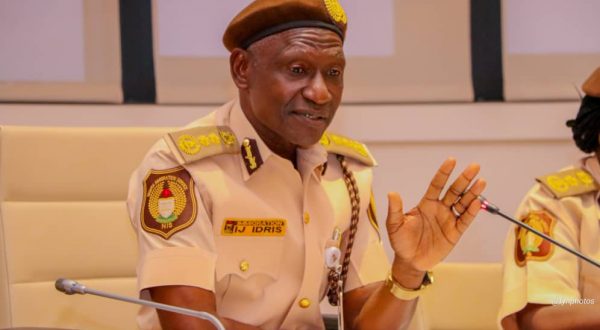 Nigeria Immigration Service (NIS) says plans are underway to upscale the NIS’ system to achieve seamless integration , reduce human interface significantly and afford the applicants opportunities to verify their details and make corrections to their data by themselves thus handing them control over the duration they wish to get their passport documents.

This is just as the Service inspected a new passport office in Alimosho local government area as part of efforts to ensure passport collection is decentralised and create capacity to further smoothen the process at arguably the largest LGA in terms of density/population in Lagos State.

Comptroller General of the NIS, Isah Jere Idris MFR who made these known at the Ikoyi Passport Office in the company of acting Assistant Comptroller General Immigration (ACG) for Zone ‘A’ headquarters Ikeja, Comptroller MC Dike mnim FICA PhD, insisted that with the upscale would reduce human interface as the Service aims to completely eliminate it so men and officers can relocate to the borders to protect the nation’s territorial integrity.

According to him, the processing and issuing process of the passport document takes three weeks for renewal of passports and six weeks for new passports but may be less once the upscale is complete in about three weeks time.

CG Idris said that the timeline has always been possible but for delays especially with regards to applicants who have not linked their National Identity Management Commission ( NIMC), causing delays to the processing of their documents hence erroneously accusing the service for such delays.

Hence the upscale which according to him,” will make sure that they sort themselves out before applying for passports and know we do not waste time. Especially if they have their NIN. They should also go through our website instead of using third party so there is effective communication between us and the applicant directly.

” If we finish processing and give them a date for collection, once it exceeds that day, we send them messages and after a week we send them another and continue until there is collection. This is what avoiding third parties will achieve for the system.

According to him, soon the Service would completely cut out the human interface in the passport application process stressing that the process will soon be made end-to-end thus reducing all elements of corruption.

He also commissioned projects at the Ikoyi Passport Office in the company of Deputy Comptroller of Immigration O.O Ayegbusi the Passport Controller including an Issuance Unit, Quarter Guard as well as a Generator set all donated by corporate organisations

On the new Alimosho Passport Office, scheduled for commissioning by the Honourable Minister Ogbeni Rauf Aregbesola soon, the CG had earlier said it will help decongest Ikoyi, Alausa and Festac Passport Offices.

He further said another choice for Alimosho is because it is the largest local government and that the NIS was equally looking for more areas where they can develop passport offices because the NIS has a centralised production system and more centres are needed to reach more people.

The NIS CGI earlier visited the Alausa Passport office to commission a Passport Processing Waiting Lounge, donated by a mon- governmental organisations in an effort provide comfort for applicants.

At the Alausa Passport Office he accessed some of the benefits of the passport reform his administration started as one leg of his tripod plans, taking time to inspect the online application processing desk, and speak to some applicants where he got some positive feedback.

CG Jere also appreciated the Chris Oyakhilome Foundation for the donation of the two Processing Waiting lounges at Alausa stressing that the edifice is a befitting Social Corporate Responsibility to the Service and would serve the applicants, whom he described as customers, well.

Recall, Idris’ plans to improve the service rests on the tripod policy of reforming the passport issuance process, strengthening the integrity of the document, effective border management as well as staff welfare.

Along with the Lagos State Comptroller , the CG also inspected the new Lagos State Command office satisfactorily expressing confidence that in the coming weeks that it would be commissioned.

Nigerianflightdeck is an online news and magazine platform reporting business stories with a bias for aviation and travel. It is borne out of the intention to inform, educate as well as alter perceptions with balanced reportage.
Previous WMO appoints Dr. Kijazi as new director, RAF
Next Nigeria Air: Defendants seek case transfer from Lagos to Abuja as AON prepares to challenge transfer motion