The Nigerian Meteorological Agency (NiMet) has declared that events such as drought, flood and heat waves constitute a serious threat to food security at both the household, community, regional, national and global levels which can eventually lead to unrest and instability.

Director General, NiMet, Dr. Anthony Anuforom, made this known on earlier today as Guest Lecturer at the 10th Annual Lecture Series of the Faculty of Environmental Sciences, Nnamdi Azikilwe University, Awka, where he said the threat is as a result of the high vulnerability of agricultural production to weather variabilities.

Speaking on the theme, “The Impact of Extreme Weather Events on Food Security in Nigeria”, Anuforom said that throughout history, the search for food has been the most fundamental human activity, and has influenced human behaviour and activities.

He however regretted that man’s quest for food security has continued to be hampered by extreme weather events.

According to Dr. Anuforom, in Nigeria, agriculture is predominantly rain-fed system and therefore highly vulnerable to rainfall extremes, adding that recurrent droughts since the 1960s, “particularly those of the 1970s and 1980s, have been a great challenge to agricultural production and food security in the country”. 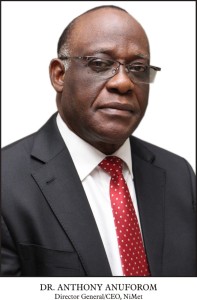 Flooding, which he noted is at the extreme opposite of the spectrum of rainfall, is as devastating and detrimental to the quest for food security as drought.

He said: “In 2012 Nigeria experienced one of the most devastating flooding on record. The floods destroyed farmlands and other means of livelihood of many households and killed very large numbers of livestock in the affected areas.

“The floods also destroyed roads, bridges and other infrastructure. The cumulative effect was a decrease in the availability as well as economic and physical access to food in the affected areas”. The good news however, according to the DG is that the impact of extreme weather events on food security in Nigeria can be managed through “climate change adaptation policies and appropriate economic framework by government”.

He further stated that weather forecast and climate predictions, such as NiMet’s Seasonal Rainfall Prediction (SRP), as well as other meteorological Early Warning Products “are useful tools for reducing vulnerability of agriculture and food security to extreme weather events” in the country.

Anuforom said in view of the fact that food insecurity could create the atmosphere for, and even fuel Socio-political instability, policies and programmes for ensuring adequate food for citizens are usually priorities of governments all over the world, and commended the present administration’s effort in this direction.

“With regard to economic policy framework, the present federal government, through the Ministry of Agriculture & Rural Development, has stated that agriculture extension service will be strengthened as part of the strategies to improve agricultural yield and food security in the country. This is obviously a laudable policy direction”, the DG declared, stressing:

“To achieve better results from this policy, agro-meteorological information and weather forecasts should be incorporated as part of the agricultural extension package given to farmers; alongside improved seeds, fertilizers, tractors and other physical items. This will enable farmers to better manage risks associated with weather extremes”, he opined.

In his Welcome address, the Dean, Faculty of Environmental Sciences, Professor Joel Igbokwe said a nation’s development is largely measured on the ability of that nation to feed her population and guaranty food security for her people at all times, stressing that extreme weather events can however reduce the ability of any nation to feed her people if not well monitored and controlled.

He said all over the world, there is a growing concern that these extreme weather events will have the very negative impact on global food production, adding that if not properly monitored, managed and controlled could drastically reduce the ability of poorer and developing countries, including Nigeria to produce regular crops for their population.

Describing the timing and theme of this year’s annual lecture as very apt, the Dean further observed that severe shortage in food production will expose people living in the developing countries to political and economic instability and conflicts. “It is this concern that motivated us to select this topic for our annual lecture”, he emphasized.

Nigerianflightdeck is an online news and magazine platform reporting business stories with a bias for aviation and travel. It is borne out of the intention to inform, educate as well as alter perceptions with balanced reportage.
Previous EATECH, UK coys introduce tech to detect adulterated Jet A1 in Nigeria
Next Concessioning viable airports is economic terrorism- Airport professionals