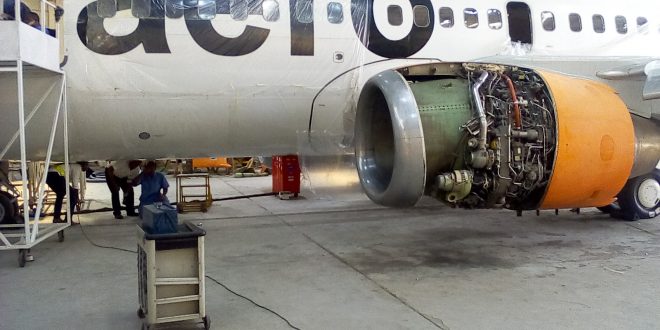 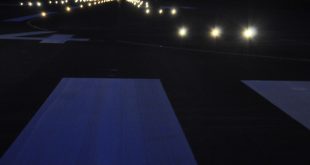 NIGERIAN airlines spend about N23bn to N25bn annually on aircraft maintenance for serviceable aircraft owned by at least nine(9) scheduled operators due to the lack of an established Maintenance a Repair overhaul (MRO) facility and this creates a big hole in their pockets; a factor tied in to their safety and economics, simply put: their survival.

On many occasions government has intended and reneged on that intention to save them from the current chokehold they are in, by establishing an MRO for the country, fro, the national hangar project conceived in the 90s to an agreement signed with Lufthansa to build one in Abuja in the 2000s it would seem the talk about hangars are hardly new to Nigerians

Up until now these dreams are still in the pipeline and the latest promise by Senator Hadi Sirika the Minister of Aviation has been no different so far.

Due to this gap noticed, Aero Contractors in 2016 established its own MRO facility in its hangar in Lagos to maintain Boeing 737-classics, Embraers and NGs as well as some turbo props and smaller jets but despite carrying out several C-Checks for its own and third party aircraft, the Aero MRO does not have the capacity to compete with the big boys in the MRO sub sector or to handle every airline in the country.

The gap has further led others, including Air Peace, Dana Air and new entrants United Nigeria Airlines to expressed interest, once land is available, to establish same facility in other parts of the country, all these leaping out because of huge cost faced by the airlines and the submission probably that no one is looking out for their interest and if they are to survive, they need to fend for themselves.

Meanwhile, six years after announcing the establishment of an MRO as a key component of growing the industry,  and one of this administrations key plans in aviation, Senator  Sirika is still foot-dragging, thus pushing these airlines to look inward as cost of maintenance is strangling them.

One of the key things to note how lack of an MRO affects the industry is what happened after nations relaxed the shutdown on flying when the world started emerging from the COVID-19 Pandemic.

Airlines from Africa and many in Nigeria who had aircraft being maintained out of the country could not get them back after the shutdown because the global industry was grounded and almost every aircraft needed some form of maintenance after six months of not taking to the skies.

Air Peace particularly lamented it had taken several of its Boeing aircraft out for C-Check before the pandemic hit and this coupled with the lockdown forced a suspension on aircraft maintenance this leading them to reduce capacity by 30% affecting its operations.

Nigeria has at least 65 serviceable aircraft flown by various scheduled operators all of which must have C-Checks after every 18 months or a particular flight cycle ( every take off and landing) and to carry out comprehensive C-check on an aircraft ranges between $1m and $2m (N470 to N940m), depending on the scope of work

This is coupled with the fact that Nigerian airlines spend about N23bn to N25bn annually on aircraft maintenance providing justification for a viable MRO or multiple ones given that the country’s aviation space is now diversifying from the usual Boeing aircraft to other brands including the Embraers, ATRs, Dash-8s and others.

In January, the Federal a Government through the Ministry of Aviation announced the consortium of AJ Walters Leasing Limited, Egypt Air Maintenance & Engineering ( EGME) and Glovesly Pro Project Limited as preferred bidder to establish the MRO in Abuja.

The Public Private Partnership ( PPP) Build Operate and Transfer ( BOT) model is supposed to have capacity to service both wide body and narrow( jet and turboprop) aircraft however like other projects it is still in the works and fears are by the time this comes on stream, most operators might have gone done due to the cost of operations coupled with charges from other government agencies.

Many have argued still that the penchant to start things anew instead of negotiating existing structures and build on them to make them better is one of the reasons why the nation’s aviation sector is all motion and barely movement.

The fact that the Asset Management Corporation of Nigeria ( AMCON) a federal government owned organization, owns an Aero that has perfected its maintenance of the classics makes one wonder why the government does not key into this and make it better instead of starting a project that is yet to see light after six years.

While all these are being considered, there is also a failure to mention an already existing $100m aircraft hangar at the Victor Attah International Airport In Akwa Ibom State, a situation that has over the years saddened Mr. Nick Fadugba who is Chairman of AfBAA, who in 2017 wondered why Nigerian airlines have not pooled resources together to grow themselves through mutual symbiosis by establishing a one stop shop for MRO also using the Ibom Hangar.

His argument then was that instead of ferrying their aircraft to Europe, Nigerian airlines can ferry it to Akwa Ibom, spend less transit time, less time waiting and save forex.

The fact that so far, the national MRO is not available and government is not looking at its already existing structures to kick start any process, most stakeholders are looking at what the nation is losing due to the lack of a well-supported MRO here in Nigeria.

Engr. Lookman Animashaun, who spoke on the MRO situation said “Nigeria doesn’t have an MRO now because we are not serious about having it. Most of the things they are doing is politics and they are telling people what they want to hear at a particular time. Honestly, I must tell you that we are playing to the galary. If truly we are serious as a nation, we should have gotten MRO now. We should have built on what we had in Nigeria Airways then, rather than liquidating it don’t let us talk about the liquidation of Nigeria Airways anymore. That has passed.

“But, I must tell you that without sustainable MRO in the country, the industry will continue to experience capital flight and what we are experiencing now, which is the moment the aircraft is due for heavy maintenance, it will be taken out, there is no foreign exchange to carry out the maintenance, the aircraft will remain there and the next we are going to hear about the aircraft is that it can’t be sent to Nigeria. That is one of the reasons we are having low capacity in the industry as at today.

The focus of federal government or any individual should be MRO facilities now. If they should do this, nobody will regret it because there is work for them throughout the year. This is the country where the weather has been so nice to us, unlike in Europe without good weather. It is good for us to have an MRO now.

Also Aviation Safety Round Table Initiative ( ART) Scribe, Grp. Capt. John Ojikutu stated that building an aircraft maintenance depot has been on the government programmes as far back as the 80s, but for the instabilities of governments and its policies, the project remains in the tunnel and never to see the day lights as long as it remains with the government administrators.

He said, “What is trending in the commercial aviation sector globally today is public private partnership. Government cannot regulate and still be sole operator aircraft and maintenance at any level. The delay in getting an MRO set up in the country can only be either there is no clear understanding among those responsible for policy administration in government or between them and those in the private partnership.

“Government cannot be thinking of concession of a part of commercial aviation and still want to keep another; again, you cannot be a regulator of the industry and still be sole operator; either it excised itself from the ventures or be minority shareholder of not more than 20%; foreign technical and financial investors 30%; credible Nigerian investors 30% and the balance of the 20% for the Nigerian public.

Animashaun did a rough calculation of monies taken out of the country for maintenance annually and stressed that without a viable MRO the nation will remain in a quagmire.

He said, “Let’s do the calculation. The minimum you can do a C-check now for any airline is $1m; there are some C-checks that can even go as high as $2m, depending on the way and manner the aircraft is maintained. Let’s keep to the minimum of $1m.

“Let’s say on the average, each airline has three aircraft, the number of aircraft scheduled airlines we have, multiple it by $1m. by the time you do that, you will realise that we are losing about $300m as capital flight annually. If you have an MRO in Nigeria, that will remain in the country. Without a sustainable MRO and the government looking at it, we will continue to be in a quagmire as we are having right away.

Grp. Captain Ojikutu on his part said,”Cost of aircraft offshore maintenance is and has always been exorbitant. It ranged between $500,000 to $2m depending on the required level of maintenance. If you imagine about 50 aircraft in a year for whatever level and at average of $500,000 to $1m for an aircraft, you might be looking at total average of $25m to $50m.

“The question to ask; do these airlines and aircraft operators make such earnings annually in returns to the CBN or we still must find money for them from the public reserve? That is the dilemma of our country in distress and now bleeding.”

Chief Executive of ONEDOT Aviation, Captain Oludotun Ogunyemi who spoke to NigerianFLIGHTDECK in 2016 said then that putting all airlines’ maintenance together will be saving the country forex, capital flight ferry cost, on time efficiency for the aircraft as well as saving ground time which will increase profit of the airlines.

As we speak, there are no major MRO facilities in West Africa coupled with the fact that Africa as a whole controls a paltry 4% of the MRO market with Ethiopian Airline MRO, South African Airways Techincal, Tunis Air Technic, Air Algierh, Egypt Air Maintenance and Engineering and Royal Air Maroc controlling that 4%market share.

The breakdown of the MRO market in 2018 also indicated that North America had 30%, Asia- Pacific 28%, Europe 26% while Middle East and South America has 6% each.

Nigerianflightdeck is an online news and magazine platform reporting business stories with a bias for aviation and travel. It is borne out of the intention to inform, educate as well as alter perceptions with balanced reportage.
Previous NCAA, like the global industry, lacks enough safety inspectors- Captain Nuhu
Next Operator charges NCAA; DSS to go after illegal charter operators