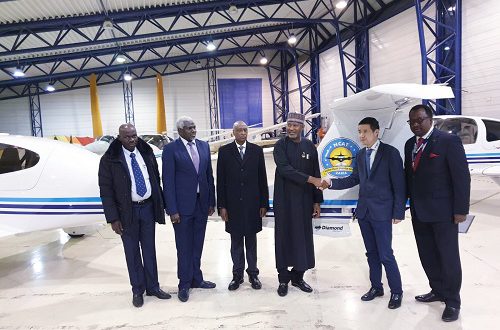 Sen. Hadi Sirika, Nigeria’s Minister of Aviation (3rd right); Capt. Mohammed Abdulsalami, the Rector, Nigerian College of Aviation Technology, NCAT Zaria (3rd left) and others at the inspection and reception of the acquired aircraft in Austria.

FEDERAL Government of Nigeria has announced the acquisition of six new Diamond training aircraft for Nigerian College of Aviation Technology (NCAT) in Zaria.

The Minister of Aviation, Sen. Hadi Sirika who announced this via his twitter handle @hadisirika shortly after inspection of the new equipment in Austria alongside the rector of the aviation school, Capt. Mohammed Abdulsalami.

His tweet read, “Just received in Austria, six new state-of-the-art aircraft for NCAT Zaria. To be delivered within 3 weeks.”

“The fleet increase for the school is ‘in our effort to catch up with technology in line with our approved roadmap.

The rector of the school, Capt. Abdulsalami in December 2019 during the League of Airports and Aviation Correspondents (LAAC) Gateway Forum hinted journalists in Lagos at the plan to take delivey of new aircraft for training in the first quarter of 2010 to boost aircraft fleet and enhance training capabilities of the institution.

“The acquisition will increase its fleet of trainer aircraft to enhance its training capabilities,” said the rector. He said acquisition of more trainer aircraft will create a window for its young pilots to gain more flying hours to prepare them ready for the job market.

The rector said: “The whole idea of getting more training aircraft is that it will greatly enhance our training capacity. By breaking down the aircraft orders into batches until the twenty target is achieved is part of strategy to equip the college for efficiency.”

Nigerianflightdeck is an online news and magazine platform reporting business stories with a bias for aviation and travel. It is borne out of the intention to inform, educate as well as alter perceptions with balanced reportage.
Previous Onyema, Air Peace boss explains why Nigerian airlines need to get it right
Next NCAT aircraft acquisition, FAAN Protocol rebrand light up the week