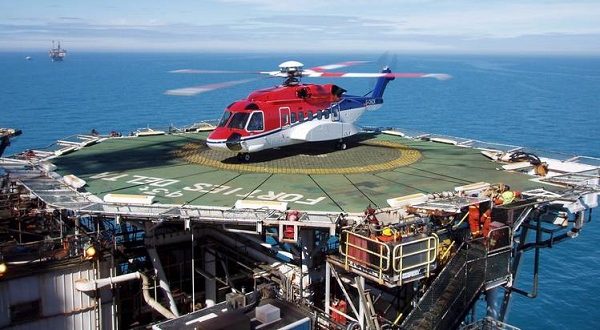 Helicopter on a helipad. Picture culled from a Wall Street Journal article

The initiative, according to the managing director of the firm, Mr. Chike Stanley would help plug leakages and increase the revenue generation in the aviation sector, create employment opportunities and also aid in providing surveillance with the installation of mobile radar technology in consonance with the wide area multilateration project currently ongoing by the Nigeria Airspace Management Agency (NAMA).

Mr. Stanley who spoke in Lagos today told the media that he noticed the lacuna that hitherto government was not charging the platforms and after years of funding a research which mapped the country, he put up the proposal to aid in capturing overlooked revenue which was approved by government through the ministry of aviation.

According to him, the charges are not to the airlines that fly but practically to the platforms where helicopters land and take-off from across the country.

He explained that the move is practiced globally and that the International Oil Companies (IOCs) cannot feign ignorance with what happens world over stressing that the country was only domesticating an ICAO law which would be a big boost.

He said, “Our mandate is to collect helicopter landing charges for IOCs and LOCs on all the platforms, oil rigs, airstrips, aerodromes, helipads, among others as government engaged us to boost IGR for NAMA.

“We want to ensure people don’t misunderstand the project, a project that would increase the IGR of the country, a project that when you talk about employment will do that and aid in reducing security threats and security issues too. Before we started I noticed some lacuna, I did a study, funded it and processed it then sat with government after that we had a stakeholders buy in.

“First my assignment is to improve navigational system, we are not just coming to collect money to collect money. You would agree with me when some of these helicopters come, they fly below radar, you can’t capture them. We are building a multi-national control room center to report how many choppers that fly in and fly out, so when they move from point A to point B, we can report that they moved from point A to Point B. Partnering with NAMA is to improve an existing system.”

On the global acceptability of their intent to generate revenue via this hitherto untapped area, Mr. Stanley said,”It is a global practice and by Chicago Conversation whatever is done in America is the same done in Canada and also Nigeria and is whatever is done in Ghana that is global practice and so the IOCs will not pretend they don’t do it , it is what happens in their country.

“We went further to make sure that outside the ICAO law, we make it a household law, enshrined in out Act so it’s a law nationally and it s a law globally.

Speaking on the charges, he explained that Naebi Dynamic was going to be adding value but would not go the way of other countries stressing,”In truth, other countries charge per weight but we just have one price tag as charge.”

On security and how it weaves into job creation he said, “You could recall we had some helicopter issues of some unknown helicopter that the state could not identify, so the FG has sat and said this is laudable as we can now be rest assured that this, with our technology and human capital on ground can be tracked.”

“This will also create massive jobs. When you talk about employment you are solving security issues ..these platforms are in someone’s community, most communities where you find these platforms, you see security everywhere which the people they are protecting can actually engage the people from the community that thy threat. The community where they have 20 persons employed and when you engage them you will have touched more than 20 lives and they have family, they have relatives

He lauded the Federal Government of Nigeria commended President Muhammadu Buhari and Mr Sirika, saying the initiative would help to generate over 15,000 jobs soon and curb criminality and restiveness among the youth

He said so far, it has trained and employed 200 persons ready for deployment.

Nigerianflightdeck is an online news and magazine platform reporting business stories with a bias for aviation and travel. It is borne out of the intention to inform, educate as well as alter perceptions with balanced reportage.
Previous Alleged misconduct at MMIA: CGI orders investigation, withdraws entire shift; threatens sanction
Next NAMA lists key requirements, coverage; benefits of PBN for domestic airlines