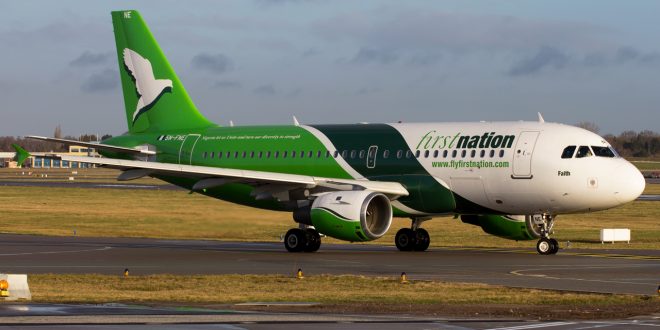 THE Nigerian Civil Aviation Authority (NCAA) today announced the suspension of the Air Operators Certificate (AOC) of First Nation Airways indefinitely for what the regulator described as flagrant violations.
This suspension was conveyed to the Airline via a letter with reference no. NCAA/DG/CSLA/RM/1-06/18/2304 dated 11th May, 2018, signed by the Director General.

The letter titled: Notice of Suspension of Air Operators Certificate was delivered to the Airline on Friday, 11th May, 2018 and First Nation Airways has acknowledged receipt.

The suspension is sequel to the flagrant and continuous violation of the terms and conditions of issuance of it AOC by the Airline thereby carrying out unauthorised and illegal operations.

The letter revealed that when the AOC of First Nation Airways expired, the airline did not have at least two (2) airworthy aircraft capable of servicing its approved schedule as required by Part 9.1.1.6(b)(2) (ii) of Nigerian Civil Aviation Regulation (Nig.CARS) 2015.

Consequently, the Airline’s Air Operators Certificate (AOC) was, upon renewal, restricted to non-scheduled operation, (Charter) only.
However, First Nation Airways embarked on scheduled operations with continuous advertisement of its services and sold tickets at its Check-in counters in Lagos and Abuja Airports.
The Authority had earlier notified the Airline that it was investigating these violations. Subsequently, by a letter dated 31st August 2017, the Airline was directed to stop the illegal operations forthwith, warning that failure to desist would lead to a suspension of its operating authorisation.
On further investigation, it was discovered that the Airline had disregarded all warnings and continued with the unauthorised and illegal operations in violation of its AOC terms and conditions of issuance.
This is contrary to the provisions of Part 9.1.1.4(d) of the Nig.CARS 2015 which provides that “Each AOC holder shall at all times, continue in compliance with the AOC terms and conditions of issuance, and maintenance requirements in order to hold that certificate.”
The Authority has therefore determined that, pursuant to Section 35(2),(3) (a) (ii) and (4) of the Civil Aviation Act, 2006, First Nation Airways is no longer fit to operate air transport business under the authority of the AOC.
Accordingly, the Airline’s AOC has been suspended indefinitely, with effect from the 11th May, 2018, when it received the notice.
In addition, the operators of the Airline are expected to return the AOC to the Authority’s Director of Operations and Training within seven (7) days of receiving the letter.
However, it should be noted that anytime the Airline demonstrates ability and willingness to comply with the extant regulations, the Authority shall review the Airline’s operations and restore the AOC to enable it commence operations.
The Nigerian Civil Aviation Authority (NCAA) wishes to restate its zero tolerance for violations of the Nig.CARS and shall continue to enforce compliance through application of appropriate sanctions for any infractions.

Nigerianflightdeck is an online news and magazine platform reporting business stories with a bias for aviation and travel. It is borne out of the intention to inform, educate as well as alter perceptions with balanced reportage.
Previous Ebola Outbreak: FG directs increased surveillance as FAAN reassures of readiness to protect gateways
Next Nick Fadugba confirms 2018 LAAC Seminar participation