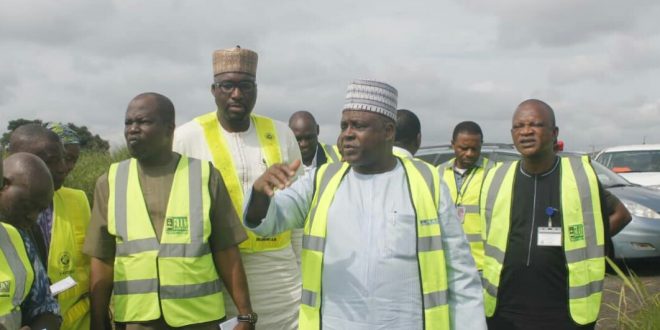 FEDERAL Airports Authority of Nigeria ( FAAN) and the Nigerian Civil Aviation Authority (NCAA) has finished inspection of the Akanu Ibiam International Airport, Enugu and have told the south-eastern governors that the airport runway is safe and of international standard.
This is just as they have given the Enugu state government the conditions that it should meet as regards previous interactions to ensure that flights can go in and out of the airport beyond 6:30pm in the evenings.
A delegation from FAAN and the NCAA made its way to the Enugu Airport after the South Eastern Governors from Abia, Anambra, Ebonyi, Enugu and Imo a few days back decried the conditions at the airport describing it as deplorable.
The governors particularly called for the rehabilitation of the runway and the lighting system calling on government to address the situation.
Director General of the NCAA, Captain Usman Mukhar who gave the runway a clean bill of health said that apart from constant maintenance the runway was still safe and of world standard.
Mukhar said,” The runway is of standard in terms of safety, we came here by air , landed safely. Except for the runway quality which a lot can be done to improve on the quality. We need to do short-term maintenance to ensure this is maintained to ensure a longer lifespan. The runway is safe Ethiopia comes at least three times in a week, they come and land, same runway. A Boeing 777-200 series has been coming so generally speaking the runway is safe, very safe. However, it lies with government policy to ensure that whatever is done is done in international standard and done properly to ensure we rehabilitate the runway.”
He also explained to the Enugu government that for the airport to be certified to do night operations, the equipment have been procured but for them to be installed the state government needs to remove all obstructions on the path of the runway.
He particularly made mention to the market and the Methodist School, close to the runway.
Managing director of FAAN, Engineer Saleh Dunoma with an entourage of engineers visited Enugu to do an on the spot analysis of the state of the airport.
Dunoma who was represented by the Director of Engineering, Salisu Daura inspected the runway and approach lights and said the airport authority was going to fix any challenges as soon as possible.
He also pointed out that there was a challenge with some structures blocking areas where projects would take place especially the market situated by the runway and that FAAN would need the collaboration of the Enugu State government to relocate the market for there to be space.
According to Daura, the installation of instrument Landing Systems (ILS) and air field lightning were germane and have been considered and a clear distance of 1 kilometre from the runway is required to carry out the installation of the lighting.

Concerning water, Daura said that if the state government clears the illegal structures, to make way FAAN will construct a dam and get water down to the terminal building because of international flight.

On the lounges at the airport, Daura said, “we are doing a lot of upgrade and renovation at our lounges.”

Nigerianflightdeck is an online news and magazine platform reporting business stories with a bias for aviation and travel. It is borne out of the intention to inform, educate as well as alter perceptions with balanced reportage.
Previous Van Vicker to man Ghana Tourism Stand at Akwaaba Travel Market
Next Unions’ threats to picket MMA2 bad for Nigeria, says stakeholder