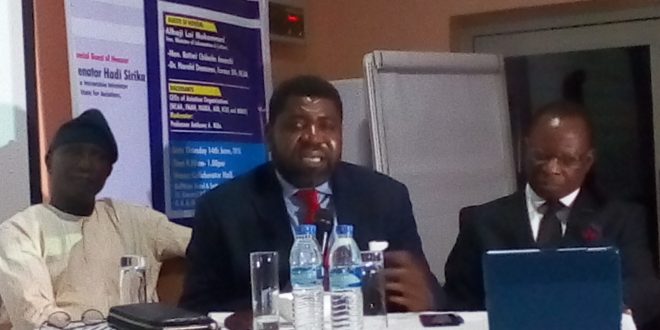 Chairman of the Aviation Round Table breakfast meeting, Dr. Anthony Kila (m) flanked by President of ART, Elder Gabriel Olowo and Secretary on the other side, Group Captain John Ojikutu (retd)

NCAA enforces 90 sanctions from 2014 till date

NO fewer than 90 sanctions have been applied from October 2014 to December 2017, affecting airlines, Aircraft Maintenance Organizations (AMO), cockpit and cabin crew as well as engineers by the Nigeria Civil Aviation Authority (NCAA) stressing that it will not go back on regulation.

The NCAA Director General, Captain Usman Mukhar made this known in Aviation Round Table (ART) Q2 2018 Quarterly Business Breakfast Meeting with theme Evaluation of Safety and Security Performance of Aviation Agencies in the last four years.

According to him however, sanctioning is not an achievement but a deterrent made to ensure that violators do not repeat violations.

Speaking on some of the NCAA’s Key Performance Indexes (KPI), Abdullahi stated that the NCAA in the past four years has had steady improvements in certain areas especially as regards professional advancement.

He stated that for the 3rd year running the country’s aviation industry has recorded Zero accidents and this is due to airlines adherence to standard operating procedures (SOPs) which are brought about by well-trained safety instructors.

Licensed air traffic safety electronic personnel increased also from 254 to 319, while flight engineers was 14 from having none in 2016 and licensed aeronautical station operators increased by seven from 100 to 107.

The NCAA director further stated that in terms of passenger traffic for 21 airport stood at a total of 25, 528 as average daily departure was 12, 761 while departure stood at 12,767 with 305 aircraft movement.

Nigerianflightdeck is an online news and magazine platform reporting business stories with a bias for aviation and travel. It is borne out of the intention to inform, educate as well as alter perceptions with balanced reportage.
Previous FAAN ready to provide seamless travel ahead of Sallah celebrations
Next Route expansion: Igbo women eagerly await Air Peace’s international flights