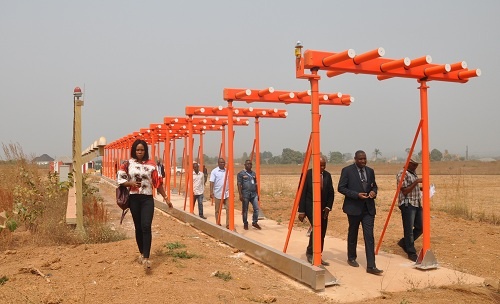 A successful site acceptance test on the equipment has also been conducted by NAMA engineers in Enugu in preparation for its calibration in the coming days.

Speaking on the gains of this latest installation, Managing Director of NAMA, Capt. Fola Akinkuotu who noted with delight that radio communication along the Lagos South East sector has “improved tremendously,” said the installation of the VHF radio in Enugu is “particularly significant as the city is strategically located to accommodate over six routes, both local and international.”

“Enugu being on a higher latitude can cover for Manfe entry/exit reporting point in Cameroun for international flights like Ethiopian, Rwanda Airlines, Kenya Airways, South Africa Airways and the like,” Akinkuotu said.

The NAMA boss revealed that the new installation has provided AFTN (Aeronautical Fixed Telecommunication Network) link that would enhance effective data communication for transmission of flight plans, NOTAMs and Aeronautical Communication messages, just as it has provided effective coordination between Enugu tower and Lagos Area Control Centre through the ATS/DS (Air Traffic Services/ Direct Speech) for departing and arriving traffic ahead of time.

Nigerianflightdeck is an online news and magazine platform reporting business stories with a bias for aviation and travel. It is borne out of the intention to inform, educate as well as alter perceptions with balanced reportage.
Previous Nigeria receives Boeing 737NG full motion simulator in Montreal, to take delivery in March
Next Cabo Verde contracts NAHCO to handle Nigerian operations