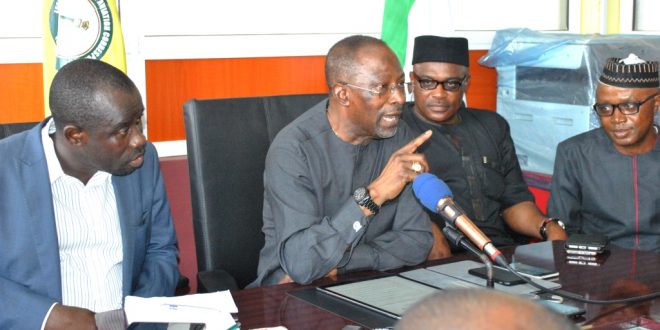 MANAGING Director, Nigeria Airspace Management Agency ( NAMA), Captain Fola Akinkuotu has justified the use of Omni-Blu Aviation services as the calibrator of its Navigational Aids, stating that the usual calibrator, ASECNA could not provide aircraft for the service when NAMA was ready.

Captain Akinkuotu who was guest of the League of Airports and Aviation Correspondents (LAAC) Gateway Forum also said that its customers were hugely indebted to the airspace manager but that they were working towards the defraying the debts.

The NAMA boss who explained the ASECNA-Omni-Blu calibration misconception, said that the use of Omni-Blu was not as a result of costs because as at the time the airspace managers wanted to calibrate some airports in the country, ASECNA’s aircraft was undergoing maintenance.

Akinkuotu explained,”Omni-blu is a Nigerian company, working in partnership with a British company. Are they registered, they are registered and approved. Was Finance an issue? Finance was never an issue it was a matter of a decision and we evaluated omni-blu to provide the right services. So they are not cheaper. But why did we migrate? There is no bias here and it’s not like we abandoned ASECNA.”

“At the time when we required to do calibration,ASECNA’s airplane was undergoing maintenance. They were not available so we had no option but to look for qualified calibrator S to come in. Fortunately Omni-blu being a Nigerian company, met the requirement and they were chosen, it wasn’t an issue of money, it was a question of you need to calibrate at certain times and some require you calibrate every six months, some require you calibrate annually so the point is we cannot wait for ASECNA to be ready.”

Speaking on the indebtedness of the airline’s to the agency, the NAMA boss said

“Our customers want ILS Category 3, they want to speak with us as if they are next door, it costs money. NAMA is not a profit-making organization, it is a cost recovery organisation. So really, as much as we understand their financial situation, but for us to continue to provide better service, they should please pay for services we have rendered. A workman deserves his wages.”

“You talked about pay as you fly, we still have it in the system and we still apply it when necessary. But having seen both sides of it, being a regulator and now a service provider, we like to keep in mind one customer who has a voice but is not heard enough, the passenger. The passenger is the reason we are all here and quite often, we don’t address their problem. The experience of flying from the get go should be pleasant. A pay as you go sounds easy for us but it is not so good for the operators and that is why we don’t use it on a day-to-day basis.”

He said, “it runs into millions. It’s huge and it’s not only in Naira and kobo, it is in foreign currency, it’s huge.”

Nigerianflightdeck is an online news and magazine platform reporting business stories with a bias for aviation and travel. It is borne out of the intention to inform, educate as well as alter perceptions with balanced reportage.
Previous Alleged N1.7b theft and forgery: EFCC arraigns Odukoya, First Nation Airways Managing Director
Next NAMA explains why some airports do not operate night flights