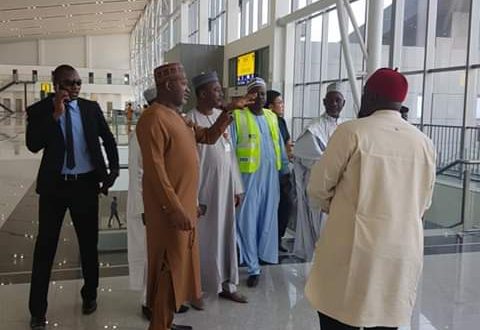 Hon Minister of State Aviation, Sen Hadi Sirika in the company of Permanent Secretary,Ministry of Transport,MD FAAN, Directors in the Ministry and FAAN, DG NCAA, Engineers, RGM and Other Officials during an inspection of the soon to be commissioned New International Terminal being built by CCECC, today18th December 2018.

ACTIVITIES have peaked  as President Muhammad Buhari is set to commission the completed Nnamdi Azikiwe International Airport Terminal Abuja tomorrow as Minister of Aviation, Senator Hadi Sirika, Permanent Secretary, Alhaji Saibu Zakari and others toured the airport to ensure all goes as smoothly as planned.

Nigerianflightdeck which arrived ahead of the commissioning tomorrow has noted that last-minute checks are being made as contractors are busy crossing ‘T’s and dotting ‘I’s.

Security is already being beefed up in and around the terminal and even the mood around the airport is of sheer optimism as workers are in certain quarters chattering about the commissioning.

NAIA is among the four terminals covered by the $600 million loan funded by the Chinese Exim Bank (US$500 million) with(US$100 million) counterpart funding from the Federal Government of Nigeria.

The terminals were meant for completion in 2016 but was extended due to some additional works and ancillary works necessary for the effective roll out of the project.

All four terminals are expected to be complete in 2019.

Nigerianflightdeck is an online news and magazine platform reporting business stories with a bias for aviation and travel. It is borne out of the intention to inform, educate as well as alter perceptions with balanced reportage.
Previous NAHCO secures EU’s RA 3 revalidation, ISAGO recertification
Next New face of Nigerian Airports- The unsung heroes