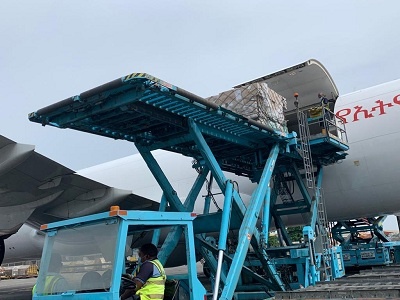 The cost and operational impact of the NAHCO strike on airlines both domestic and foreign plying Nigeria and passengers is rising fast with Air Peace, disclosing that the ongoing strike has cost the airline over 500 million naira and has paralysed its operations across its large network.

Both airlines and passengers are left to hold the short end of the stick with delays that would affect their operations and probably their bottom line.

Already, the impact of this on passengers is already visible as a visit to the Murtala Muhammed International Airport MMIA shows the chaotic way the terminal is as airlines are trying hard to manage their affairs since one of the two major ground handlers staff embarked on strike.

Passengers can be seen both in and out of the terminal all wondering if they would be checked in or if they would fly as the entire system especially for airlines handled by Nahco has been on a flux.

Already affected this morning are Royal Air Maroc, Qatar Airlines passenger flights which were turned around and Virgin Atlantic, which has to offload their staff with its cargo still on the aircraft as at the last report.

Equally, a Qatar Airlines Cargo which landed in the morning took 2 hours to disembark since it touched down, cargo are still in the aircraft.

On the domestic scene it gets complicated as the handlers take care of Air Peace, Azman, Dana, United Nigeria, et al most of whom released operations impact statements to the public stressing how the current situation will affect their airlines.

In fact an agreement signed by both handlers have equally stalled airlines’ move to another ground handling company to salvage their operations further deteriorating an already bad situation.

An airline staff that spoke to NIgerianFLIGHTDECK anonymously said,”Yes Nahco are our handlers, their strike has a big impact on our operations because they are our only handlers, we contacted SAHCO early in the morning but gave us an excuse that their is mutual agreement between them and Nahco that they will not rescue any airline they are handling in the event of industrial action, we resorted to using our workforce (Avsev ,our cargo handlers and our vehicle) to execute the work with the aid of staircase we got from Valuejet Airline.”

Air Peace in a statement says NAHCO’s staff industrial action continues to affect flight operations that have been crippled across the country.The airline management in a statement said that the ground handling company did not pre-inform them about the strike nor was a public notice issued.

“Neither NAHCO nor the striking union informed us of an impending strike. Our staff reported to work and noticed an ongoing industrial action. If we were informed beforehand, we would have conveyed same to our passengers early enough.

“Now, all morning flights and other subsequent flights have been disrupted- cancelled, delayed and rescheduled. This has cost us over 500 million naira as we operate over 100 flights daily. Passengers are also attacking our ground staff as they cannot fly.

“We have notified the flying public of the strike but it is important to stress again that the action is by the staff of NAHCO, not Air Peace. It is an action against the Management of NAHCO, and Air Peace has nothing to do with it. “While we monitor the situation and hope things return to normal soon, we regret the impact of the disruptions on the travel plans of our passengers and implore them to desist from assaulting our staff. We are not responsible for the disruptions”, the airline stated.

Another airline staff was upset at the entire situation where the airlines said additional costs, like delay packs, extra pay for crew hours, even passenger ire will all be focused on the airline for something of no fault of theirs.

He said, “The truth is its normal, at the end of the day the airlines will be left holding the ball. The airlines share delay packs which come with additional cost, the schedule is affected, people will probably fly into the night.

“So we know the implications but it’s all on the airlines’ who will bear all of this. You have to pay the crew, they are at work already and so you have to pay, the longer hours a crew in the aircraft you have to pay ( crew hours). So the impact is there, it’s much it’s huge.

“And they know, this is not the first time this is happening, remember the one of MMA2 this one again and they did not communicate it properly or people would have known on Sunday and make arrangements and send messages.”All our flights are delayed. So who bears it?” He said.

Nigerianflightdeck is an online news and magazine platform reporting business stories with a bias for aviation and travel. It is borne out of the intention to inform, educate as well as alter perceptions with balanced reportage.
Previous NAHCO: Unions embarked on strike despite subsisting order but situation under control
Next Unions, NAHCO reach agreement call of strike