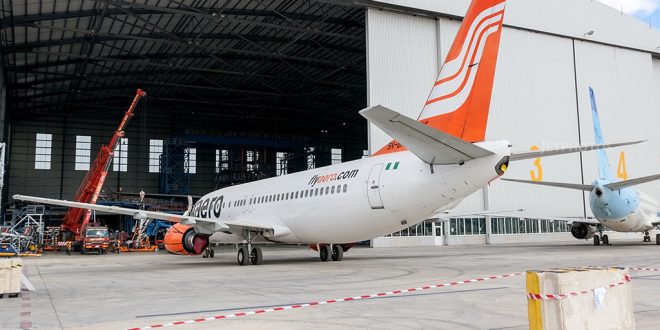 Managing Director of Aero Contractors, Captain Ado Sanusi has lamented yesterday’s strike by staff of the Nigerian Aviation Handling Company ( NAHCO) and has called on the Nigerian Civil Aviation Authority( NCAA) to licence more intending players in the ground handling business to break the seeming monopoly of the duo.

This is just as he has called for an independent investigation into the processes of the action embarked upon by workers stressing that the handling company should be liable for not issuing Notice to Airmen ( NOTAM) to airlines before hand and responsible staff identified and held accountable.

Sanusi was speaking to a television station Arise monitored by our correspondent  where he noted that Aero Contractors incurred losses and even had to reschedule flights and cancel others especially to airports where services are restricted to daylight operations.READ ALSO: NAHCO strike: Air Peace loses N500m as airlines, passengers rue impact

On the inability of the handling company to alert the airlines after getting a five day notice of the impending action, Sanusi said: “if NAHCO is found guilty of not issuing a NOTAM telling the authorities there is an impending strike in five days there are ways to sanction them, fine them; make them pay for losses you can even suspend their licences.

” You can equally identify the people responsible and make them accountable, we have to be accountable for our actions.

On of a law suit should be instituted he said,” There are two handling companies and they are a monopoly  as we said. The lawsuit should be to the NCAA and you can join NAHCO and the rest. There should be an investigation to find out if due process was followed and what the process of engagement is when you want to go on strike especially when you perform critical services in the industry and any industry for that matter.

“Air traffic controllers, handling companies, fire services  these are critical and should not go on strike to disrupt operations so. In as much as it is the union’s right to go on strike they can seal offices and not allow work administratively not to disrupt flow of traffic. That is dabbling in national security.

” Imagine a flight with over 300-400 passengers and they cannot land because there is no handling company, imagine the cost to the airline.

On ending these kinds of actions, the Aero boss said,” First we have to break the monopoly SAHCO can provide ad hoc services when NAHCO is entangled in such a situation and vice versa.

However, this may mean the handling companies have to break their agreement where of one of them is in a tough patch the other is not allowed to access it’s clients, part of the clause the companies agreed when signing the new safety threshold tariff hike.

Sanusi however said this kind of situation will repeat of no action is taken calling on the regulator to licence more ground handling companies.

” If negotiations fail we go back to square one. The NCAA should license other players that want to come into the handling environment.

Nigerianflightdeck is an online news and magazine platform reporting business stories with a bias for aviation and travel. It is borne out of the intention to inform, educate as well as alter perceptions with balanced reportage.
Previous Aviation Minister reels out NiMet’s 2023 SCP, along with DG; emphasises early warning, action
Next Aviation projects in Enugu, Jigawa get N10.08bn FEC approval