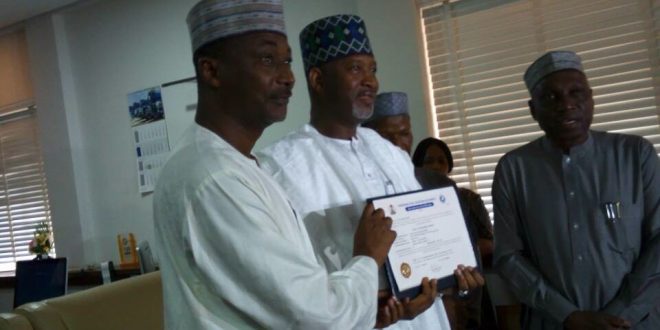 Permanent Secretary of the Ministry of Aviation, Sabiu Zakari with Minister of State Aviation, Hadi Sirika with the certificate presented by the FAAN MD, Engineer Saleh Dunoma in Abuja earlier today

This is just as he has expressed joy at the certification of the Nigerian Meteorological Agency (NiMET) which became the first and only country in Africa to attain the 2015 ISO 9001 Certification.

Both airport certification and the NiMET Certification was handed to the minister by Managing Director FAAN, Engineer Saleh Dunoma and NiMET Director General, Professor Sani Mashi.

The Minister who was elated by both achievements said that when the Abuja Airport was shut down for runway repairs it was a plus but with the certification is a bigger plus.

“It is a huge achievement in the build up to the election of President Muhammed Buhari we promised to bring strong institutions and strong institutions begets strong nations and we have hastened to certify our airports by standardizing them to reflect certain minimum standards of safety.”

“Shutting down Abuja is a plus but the certification is a bigger plus. We want to ensure our ministry is strong, focused, effective and that of Nnamdi Azikiwe International Airport, we hope before the end of the year will be certified.”

“Now the world will know that flights in and around Nigeria are safe and secure and that will increase the value of our airports and will shore up the value of our infrastructure especially are we are geared towards concessioning.”

Managing Director Federal Airports Authority of Nigeria (FAAN), Engineer Saleh Dunoma who spoke while presenting the certificate to the Minister said the certification has created standardization and uniformity in the aerodrome making it at par with others everywhere despite different management.

He stated that with the MMIA now, FAAN can now concentrate on the NAIA,”With MMIA done we will move to certify NAIA and from there move to certify the other international airports. FAAN is determined to maintain and surpass the aerodrome certification. It was a concerted effort with all our sister agencies as well as the Airports Council International (ACI) and the ICAO regional office and we are appreciative of their support and the support of the honorable Minister who stood steadfast and created the enabling environment for this to happen.”

Nigerianflightdeck is an online news and magazine platform reporting business stories with a bias for aviation and travel. It is borne out of the intention to inform, educate as well as alter perceptions with balanced reportage.
Previous Disarray in rally as unions protest concession
Next ICAO, NTSB train AIB personnel on investigating air accidents