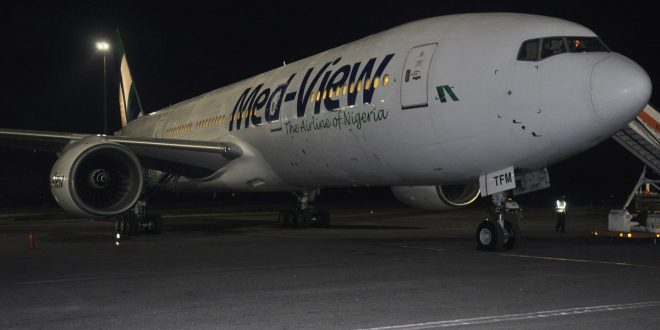 Med-View to airlift 17,000 pilgrims back home in two weeks

Share
MED-VIEW Airline has said that  on Sunday September 10 it will commence the airlift of pilgrims from Saudi Arabia back to Nigeria.
Chief Executive Officer of the airline, Alhaji Muneer Bankole who disclosed this  said that over 17,000 pilgrims would be airlifted back home, assured that the return trips would be completed in two weeks.
The airline airlifted pilgrims from Lagos, Oyo, Osun, Kaduna, Kwara, as well as South-South and South-East states. It also airlifted thousands of pilgrims of tour operators under the aegis of Association of Hajj and Umrah Operators of Nigeria (AHUON) from Lagos, Kaduna and Kano zones.
Med-View also conveyed pilgrims to the Kingdom of Saudi Arabia from Djibouti and Guinea-Bissau.
Bankole, in a chat with newsmen on the commencement of return journeys said three aircraft – B747- 400; B777-200 and B767-300 would be deployed to return the pilgrims back home.
According to him, the airline had in the last 11 years of its involvement in Hajj operations airlifted 350,000 pilgrims without any hitch.
He also advised the National Hajj Commission of Nigeria (NAHCON) to avoid last-minute approach in planning for the annual pilgrimage exercise to make it smooth and seamless for the pilgrims.
He said, “What I always believe in is to appreciate God Almighty first and second is to thank my team, my colleagues for their dedication, commitment. It is not me that is running the show. It is everybody and you can see the commitment.
“Before we closed the shop last year, we have already planned for 2017. We got all the necessary documentations passed across to GACA (General Authority of Civil Aviation) and every organization in Saudi Arabia. So it makes it a piece of cake. So closing from Nigeria on time is part of the planning. We deployed three aircraft- 747- 400; B777-200 and B767-300 for the Hajj.
To NAHCON, he said “We should learn from what they do in Tabung Haji, the Malaysian Hajj authority, the Indonesians, they have over 220,000 pilgrims, no issue. We shouldn’t be the last to do the planning. What we are doing in 2019, we should be talking about it in 2017, two years ahead planning. We have to desist from this approach of last minute’s game plan.
“This is the advice I will give to NAHCON and other stakeholders. We should work ahead of time. So if we do early planning, get your normal details, then we are back home. We have to learn from each lesson of every Hajj, it comes with  its own peculiar problems and from this we get there.”

Nigerianflightdeck is an online news and magazine platform reporting business stories with a bias for aviation and travel. It is borne out of the intention to inform, educate as well as alter perceptions with balanced reportage.
Previous FAAN appeals for patience, understanding as LASG begins Airport Road reconstruction
Next ARFFS brainstorms on improving aviation emergency management, inter-agency collaboration