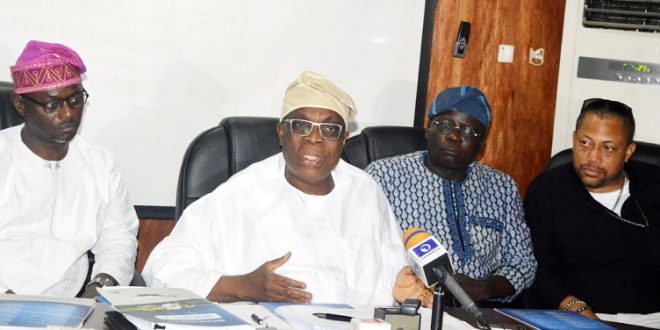 ALHAJI Muneer Bankole, the managing director of Med-view Airlines has revealed that it has had to undergo rationalization of 52 staffers both professional and administrative as part of efforts to realign its operations.

This is just as he explained that the airline is not indebted to any of its international service providers stating that if Med-view had paid to the tune of $9000000 to Gatwick Authority, Menzies and World Fuel in the United Kingdom alone.

Bankole made this known at the weekend in a chat with reporters while explaining rumors making rounds that the airline was currently owing salaries and other service providers.

According to the Med-view boss, the airline had paid January salaries and had paid up 60% of their staff in February and was not indebted as those rationalized had to undergo the companies processes but will be paid.

Bankole said,”Today, I will tell you Med-view is carrying out staff rationalization and that is normal in any business. We came back in January and we announced to staff that we had to carry out this exercise (rationalisation). In January we are not owing anyone and in February we have paid 60% of our colleagues including our pilots but those that were laid off were 52 and we are still doing it.”

“We had to rationalize their salaries because they have to meet the process and procedures of disengagement, because when they give you a letter you have to go through Human Resources, return your Identification card and we check your books to see if you are not on loan and then they pay your final package.”

” in January, we have paid all and paid 60% in February and we are doing the exercise simultaneously. It affects captains , engineers, handlers and it affects those who have cases and those indicted for disciplinary of fences are equally affected.”

” if you owe a foreign service provider you will not last six months. Reason is that the antecedents of the past and many airlines have come and did not last six months then left a bad taste in the mouth. So what they told us is that we must have a commitment to give 3months. Some of them we rejected, some: putting our credibility in line, we said they should provide us service and we have met that since.”

” I can give you specifics, Gatwick in the UK, Menzies and World fuel, between hem we have paid $9million,” he explained.

The airline, according to Bankole, is also realigning its operations to ensure its long term sustainability by strengthening its domestic operations.

“The 777 is undergoing C-Check and will be back by May but this affected our scheduled operations. When you have two aircraft outside, you restructure your operations and plan your schedule.”

” What We have achieved now, they say charity begins at home, is that instead of flying everywhere and making nonsense of the whole operations, we consolidated our domestic operations and you can see with no challenge we are flying 99.9% capacity.”

Nigerianflightdeck is an online news and magazine platform reporting business stories with a bias for aviation and travel. It is borne out of the intention to inform, educate as well as alter perceptions with balanced reportage.
Previous Delta Air Lines announces March Quarter Profit
Next Kenya Airways sacks 22 of 26 Nigeria employees, claims redundancy