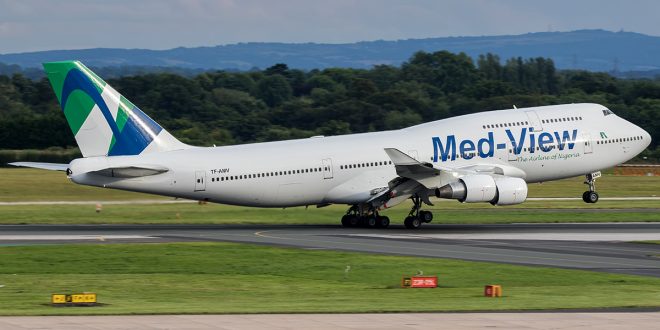 MANAGING director, Med-view Airline, Alhaji Muneer Bankole stated that the airline and others have the capacity to airlift Nigerian pilgrims positing that with the capacity of the airlines put together, the number being airlifted can be handled with relative ease.

This is just as he stated that the airline will be airlifting over 3000 pilgrims from the state with three aircraft including its Boeing 747, Boeing 767 and once arrived, its brand new 777 ER aircraft.

Bankole who spoke at the Kaduna Hajj Camp ahead of the hajj airlift from Kaduna said,” We have three aircraft slated for this exercise, one is the 747-400 with a capacity of 463 and the second aircraft is the 777-200 which is joining the fleet and is equally the new aircraft which we are introducing by this weekend and thirdly is the Boeing 767-300 Extended Range which is landing in a couple of hours from now, that shows the seriousness and commitment of the airline that we are fully ready.”

“From Kaduna for Med-view we have about three thousand as of today and we are prepared for them to run it for about 5 days and we are done. Every day we will be doing about 680 to 700 and when you multiply for five days we are done.”

On the capacity of Nigerian airlines to airlift its pilgrims completely, the Medview boss stated:

“I will tell you that that is not correct, today we have a strong carrier in Max Air which has three aircraft which carries about 500 passengers daily, Med-view has three aircraft which carries almost a thousand per day and so if you put all this together we can airlift two to three thousand per day multiply by the number of days it is less for the Nigerian indigenous carrier.”

“The number was cut down by 20% because of the construction of the Holy houses but now it has been returned and Nigeria has 95,000 pilgrims.  So it’s just the economic situation and the cost of dollar that are an alternate factor militating against increased numbers.”

On its London operations, the Medview boss stated that the airline was rebranding it and so is bringing in the 777 -200 before the end of the week

“Brand new, configured the business class with Air France seats and we ensure that what the passengers are asking for: in-flight entertainment is built-in. for every single economy passenger he has to himself a screen which acts as a companion when you are flying Med view.”

To be honest with you, between now and mid-September there is no seat on Med-view for those who are coming home and so I seize the opportunity to thank Nigerians for their commitment and believe in this company.”

Nigerianflightdeck is an online news and magazine platform reporting business stories with a bias for aviation and travel. It is borne out of the intention to inform, educate as well as alter perceptions with balanced reportage.
Previous First nation N33.5m fine: Appeal panel upholds airline, pilot sanctions
Next FAAN: Reaping the gains of Executive Order