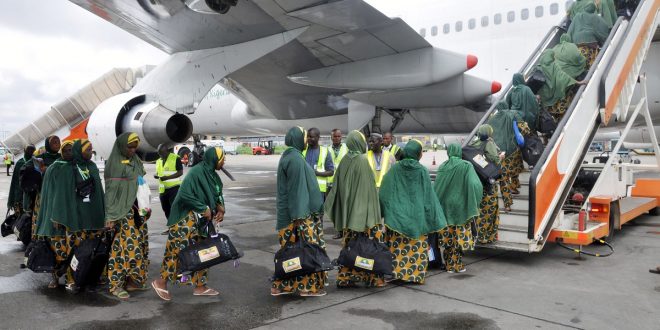 Med-View passengers boarding an aircraft during the first batch of Hajj Pilgrims Operations from Lagos State being airlifted by Med-View Airline at the Murtala Mohammed International Airport, Ikeja, Lagos on 06/08/2017.

ONE of the official carriers for the 2017 Hajj operations, Med-View Airline PLC, will today complete the return airlift of pilgrims who performed this year’s Hajj exercise with the last flight of pilgrims from the Eastern zone comprising Enugu, Port Harcourt, among others departing King Abdul-Azeez International Airport today.

Managing Director/CEO of the airline, Alhaji Muneer Bankole in an interview disclosed that about 15, 000 have been returned home from Nigeria.

It would be recalled that the airline commenced return journeys on Sunday September 10 with a promise to compete the airlift in two weeks.

The figure comprises pilgrims from Kaduna (about 5000), Lagos, Kwara as well as international pilgrims who came through the tour operators. The last batch of Kaduna pilgrims departs on Wednesday night while the airlift of Lagos zone consisting of Lagos, Oyo and Osun and Edo pilgrims has been concluded.

Outside the shores of Nigeria, the airline also airlifted 1, 400 pilgrims from Djibouti, 500 from Guinea-Bissau and another 600 Sudanese pilgrims from Khartoum, the Sudan capital.

The airline which deployed three aircraft for this year’s exercise including B747-400, B777-200 and B767-300 has in the last 11 years of its foray into Hajj operations airlifted over 350,000 pilgrims who performed the annual Hajj exercise.

Bankole commended the stakeholders including the NAHCON management for their contributions to the success of the Hajj exercise.

He said, “We airlifted about 15,000 from Nigeria including international passengers from Lagos, Kano and environs including the allocations from the National Hajj Commission (NAHCON). We have now gone international by airlifting pilgrims from Sudan, Guinea-Bissau and Djibouti, if you add those ones, we have more than 17,000 pilgrims.

“The exercise has been successful by the grace of Allah. The way God has made it easier this year was wonderful. We thank everybody including the entire management of Hajj Commission and all the stakeholders as we hope for better 2018”.

Nigerianflightdeck is an online news and magazine platform reporting business stories with a bias for aviation and travel. It is borne out of the intention to inform, educate as well as alter perceptions with balanced reportage.
Previous BA offer customers free flights to celebrate Nigeria at 57
Next FAAN assures of safety; as Nigeria celebrates independence