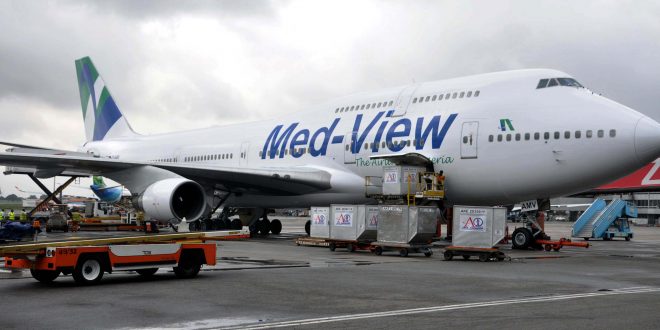 REACTING to a recent report making rounds on an online medium and the social media, management of Medview Airline yesterday said issues raised in the reports about its operations were tainted with falsehood.
Executive Director, Business Development, Alhaji Isiaq Na-Allah, who reacted for the airline said the story which loomed large on reorganization, maintenance and staff welfare fell short of ethics of journalism, which entails reflecting both sides of an issue.

The statement said that any reasonable organization with business model will react to the prevailing economic situation in the country, which has made it inevitable to carry out such re-organization, for which the reporter is crying wolf.

“Safety comes first in everything we are doing, and a number of our aircraft have gone on maintenance checks, which accounts for the fleet reduction with a direct impact on our operations”

According to the airline, the staff rationalization recently carried out has shored up its revenue and reduced overhead cost, which has made it healthy.

As a public quoted company, nothing is hidden from the public as reports of our activities are filed with the NSE, and they are available to any responsible media outfit that wants to enlighten with factual reporting rather than hearsay.

This same report was also published objectively by Businessday of Sunday Nov 11th.

The airline said that every action it has taken so far was designed to put the flag carrier on a sound footing for the interest of the public as well as shareholders.

Nigerianflightdeck is an online news and magazine platform reporting business stories with a bias for aviation and travel. It is borne out of the intention to inform, educate as well as alter perceptions with balanced reportage.
Previous Made in Nigeria Helicopters to debut soon as NASENI partners NCAA
Next Ghana set to deport 30 Nigerians for sundry offences