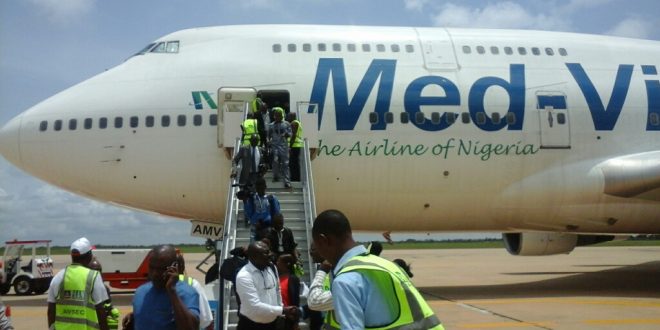 Archival pictures: arrival of Med-view Airline's Boeing 747-400 in Kaduna to airlift pilgrims to the 2017 hajj

MED-VIEW Airline yesterday commenced airlift of Ogun pilgrims with about 550 Pilgrims consisting 278 male and 272 females and 2 Officials of the National Hajj Commission ( NAHCOM).

The flight, VM 1037 airlifted pilgrims to Jeddah at about 23:50hours and the airline will continue to airlift pilgrims from the South-South as the process continues.

Meanwhile, the Kaduna State Muslim Pilgrims Welfare Board has, so far, transported 2,181 pilgrims to Saudi Arabia for this year’s hajj.

Abdullahi told newsmen that, so far, 1,301 males and 880 females were transported by the Med view airline. About 3,600 intending pilgrims are expected to perform the pilgrimage from the state this year.

Nigerianflightdeck is an online news and magazine platform reporting business stories with a bias for aviation and travel. It is borne out of the intention to inform, educate as well as alter perceptions with balanced reportage.
Previous Airport intruder: ANAP scribe asks FG to halt AVSEC recruitment, profile existing personnel
Next Fmr FAAN Director canvasses resurgence of DERAM to solve BASA challenges