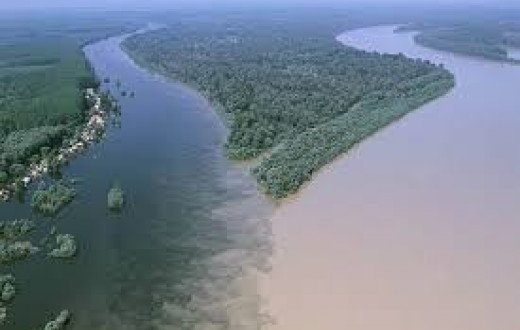 The brown River Niger joining with the green River Benue forming the base of the 'y' before the tail.

Lokoja:  Home of the Niger, Benue Confluence; a tourist’s haven

When contemplating a place to go to for the holidays where you can have fun and get the kids to learn a little bit of the history of this great nation, Nigeria, look no further; the Confluence State, Kogi is the place you must be.

The capital of this rich archeological state Lokoja holds major significant landmarks in Nigeria and one of such like an adhesive keeping it all together, it is the spot where two great rivers, River Niger and River Benue come together in Lokoja forming a Y-shaped structure and draining southwards into the ocean, thus the name Confluence state.

Nature’s beauty also shows that the Rivers where they meet show all their distinctive features as the River Niger is brownish in colour while the River Benue is light green in colour both maintaining the colour till the tail of the river as it flows into the ocean.

History: River Niger remained a marvel to the Europeans until John and Richard Landers passed through the Confluence on October 25th 1830, completing the journey that Mungo Park had started. Rivers Niger and Benue are two largest rivers in West Africa.

In 1775, the famed British explorer Mungo Park had blazed the trail as the first European to set foot here. Another expedition led by McGregor Laird and Richard Lander was carried out in 1832, followed by the 1841 exploration commanded by William and Bird Allen. Subsequently, Dr. Belfour Baike and other explorers had followed suit in 1854 and 1857.

A British consul was appointed for Lokoja in 1858 and that as far back as 1865, the British government, in recognition of the town’s importance, had established a consulate here. Lokoja’s place in Nigeria’s political history would be better understood bearing in mind that the inauguration of Lord Frederick Lugard as Governor of the then Northern Protectorate also took place in that town on 1 January, 1900.

It was in Lokoja that Mr. George Taubman Goldie, the then head of the Royal Niger Company, precursor of today’s United African Company (UAC), handed over the reins of The Niger.

Ebira, Igala, Nupe and Yoruba are the major languages widely spoken in the state while other languages are considered to be minority.

Farming is the main occupation of the people of the state and crops produced include cassava, yam, rice, maize, guinea corn, beans, soya beans, asha and millet. The state is blessed with precious mineral resources like columbite, coal and aquamarine.

Kogi State is bounded to the east by Nassarawa State, to the south by Enugu, Anambra and Edo States, to the west by Ondo, Ekiti and Kwara States and to the north by Niger, Abuja and Nassarawa States. The state has a land area of 29,833km. Kogi state has a total land area of 28,313.53 square kilometres and a projected population of 3.3 million people.

It lies on latitude 7.49oN and longitude 6.45oE with a geological feature depicting young sedimentary rocks and alluvium along the riverbeds, which promotes agricultural activities. The state features ferrasols soil type and famous hills like ososo hills, which spread from Edo State to the western part of Kogi State and aporo hill on the eastern part. Another famous mountain is Mount Patti, which lies in Lokoja and stands at about 750 metres above sea level.

Given Lokoja’s place in Nigeria’s political history, it comes as no surprise that the town has so much to offer the tourist. Lokoja offers at least half-a-dozen tour sites. From many parts of Lokoja, the tourist can savour alluring sight of terraces of houses cascading down Mount Patti.

“Patti” means hill in the Nupe tongue, and that this hill peaks at 458.3metres above sea-level. A certain Lord Frederick Lugard was the first Governor General of Nigeria’s Northern Protectorate. He later became Nigeria’s premiere Governor General between 1914 and 1919. A Rest House named in honour of this colonial overlord stands atop Mount Patti, and parts of the Ajaokuta Steel Complex can be seen from the top of this mountain, which also offers a good aerial view of sections of Lokoja as well as the Confluence of the Benue and Niger Rivers.

Confluence of Rivers Niger and Benue

Lokoja presents a lot of tourist attractions one of which is Nigeria’s longest river, the River Niger which connects some 4,160km from its source in the Futa Djallon Highlands on the Sierra Leone and Guinean border meets the Benue River, which flows in from the Cameroon at Lokoja. The Niger-Benue Confluence, the point where these two great rivers meet, is a Y-shaped spot. During the dry season, sandy patches of land, perfect spots for picnics, emerge from the much dropped volume of waters. However, these seasonal islands are usually submerged throughout the rainy season.

Fishing is carried on extensively on the rivers. There are ferry and boat services plus cruising facilities within view of the confluence.

Other places for a tourist to visit are:

World War Cenotaph, Lokoja: The cenotaph was built in memory of soldiers who lost their lives during the Second World War. This is a massive concrete block on top of which is mounted an old artillery. Beside it are light cannons and machine guns mounted on small pavements and the names of the soldiers who distinguished themselves during the wars were written on tables mounted on the side of the cenotaph.

Osome Falls: Located in Ukpogo, Osome is a stream that winds its way through vast igneous rocks of varying heights and sharply descends into a valley about 50m below the towering rocks, producing thunderous sounds which could be heard about one hundred metres away.

Mount Patti, Lokoja: This is a massive hill towering over Lokoja with about 15sqkm flat top where on could see the confluence point of River Niger and River Benue.

The Iron Liberty: Located in Lokoja near the banks of River Niger, this is an important centre for slave trade during slavery era in Nigeria. It also the path through which the European explorers and missionaries in the early 19th century settled in the country.

European Cemeteries: The biggest European cementary in Nigeria with remains of european soldiers of the West African Frontier Force (WAFF) in Lokoja until 1926 and those of European missionaries. Some of the tomb stones in the cementaries date as far back as 1867.

Awo Tunnel: The tunnel which is about one kilometer long was dug during the reign of Onoja Obani and it serves as a hiding place for the royal family during the wars in Idah.

Also, the wayfarer is advised to look in at the Lokoja station of the National Museum, when in the Kogi State capital. Even, if the tourist was not out to see artefacts, he/she might still end up inside Lokoja Museum complex because the place is also home to several bars and eateries.

There are beautiful accommodations for tourists in Kogi State and more are springing up every day, they are furnished quite well and do not cost an arm and a leg to stay in them, you can get accommodation for as low as N5000 per night to about N17-N20, 000 per night.

Some of the accommodations come with three course meals, which are well worth it.

Nigerianflightdeck is an online news and magazine platform reporting business stories with a bias for aviation and travel. It is borne out of the intention to inform, educate as well as alter perceptions with balanced reportage.
Previous EgyptAir MS804 voice recorder retrieved from the Mediterranean
Next First African Solo Flight kicks off June 23, commences from USA not Nigeria