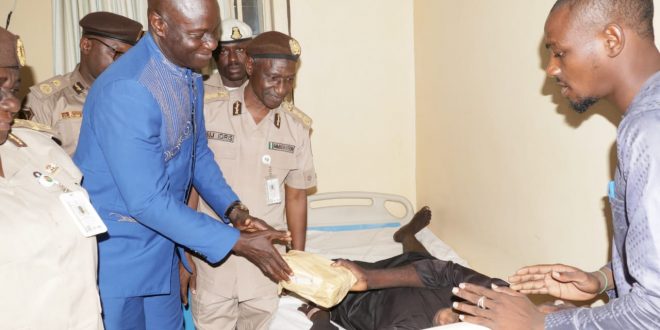 COMPTROLLER General of Immigration Isah Jere Idris has visited Dutse Jigawa State to commiserate with the family of one of an NIS Border Patrol Personnel who paid the ultimate price following an attack on their Base by some suspected Bandits.

It would be recalled that some unscrupulous elements attacked the Galadi Control Post along Maitagari-Birniwa axis on the 9th of August 2022 at about 2325 hours wounding two Personnel while Abdullahi Mohammed, a Chief Immigration Assistant lost his life following the gunshot injuries he sustained during the attack.

The two wounded Personnel Abba Musa Kiyawa, a Deputy Superintendent and Zubairu Garba an Assistant Inspector are currently responding to treatment in a medical facility in Dutse According to a statement eSigned, Deputy Comptroller Of Immigration and Service Public Relations Officer, Amos Okpu mnipr

The Galadi-Birniwa Patrol area is located few kilometres to the republic of Niger.

Speaking at the medical facility where he went to check on the Personnel, the Comptroller General praised their gallantry especially for putting up a strong resistance and assault on the Bandits which led them to flee the scene abandoning their motorcycles and other items.

He assured that the Service under his watch will continue to place prime priority on the welfare of all members of the workforce as a critical component of his agenda.

The Service, he noted, shall ensure that they are properly taken care of and wished them quick recovery. He stated that he remains very proud of their gallantry and assured of management’s continued commitment to staff welfare.

While at the family house of the slain Personnel, the Comptroller General said ‘I am in Dutse to personally commiserate with you the family members of Abdullahi Mohammed, a very gallant gentleman who paid the supreme price while on the line of duty in the defence of our nation’s Borderlines’. His Patrol team came under attack when some suspected bandits numbering five approached their Patrol Base on two motorcycles and opened fire leading to the death of your son Abdullahi Mohammed and injuries to two of his colleagues’.

He restated that the late Abdullahi Mohammed was a fine gentleman, a hero and a great patriot and that he was in the State to honour his gallantry, sacrifice and uncommon commitment to the safety and security of the nation’s territorial integrity. He thereafter assured his family members that their dear son has not died in vain.

Meanwhile, the Comptroller General has expressed delight at the pace of recovery of the two wounded Personnel assuring that they would receive the best medical attention.

Earlier at the Government House, he assured the government and the good people of Jigawa State that no amount of harassment, intimidation and or unnecessary attacks will deter his operatives from effecting strong security cover across all the nation’s Borderlines.

He maintained that his administration is making good progress on the eBorder project which he hope will improve Border security efforts and appealed for continued support from the state government and other relevant stakeholders especially with respect to provision of operational assets, intelligence gathering and sharing.

Responding, the Governor of the State, His Excellency Muhammad Abubakar Badaru represented by the Head of Service, Hussaini Ali Kila said that the State will continue to offer support to all security, military and response agencies in the State to ensure enduring peace and development of the State.

He commended the Comptroller General for travelling from Abuja to Jigawa State to identify with members of his workforce in their trying moment and described such gesture as most humbling and morale boosting.

The Emir of Dutse, His Royal Highness Alhaji (Dr) Nuhu Muhammad Sanusi CON, had earlier commended the selfless leadership style of the Comptroller General as demonstrated by the visit to Dutse to commiserate with his operatives and their family members. The Comptroller General used the opportunity of the visit to the Emir’s palace to condole with the royal father on the loss of one of his subjects Abdullahi Mohammed and to seek the partnership of traditional and religious leaders in security matters.

The Emir agreed no less stressing that his emirate council has consistently put huge priority on security matters and so would support all security agencies for a safer and prosperous Jigawa State and Nigeria as a whole.

A major highlight of the event was the presentation of some cash gifts to the families of the slain Personnel and the recuperating two by a representative of the management of CONTEC Limited Mr. Sanwo Olatunde as part of their social responsibility activities and identification with the gallantry of the Personnel.

Nigerianflightdeck is an online news and magazine platform reporting business stories with a bias for aviation and travel. It is borne out of the intention to inform, educate as well as alter perceptions with balanced reportage.
Previous $464million trapped funds: ASRTI says Nigeria’s handling of impasse portrays it ‘investment unfriendly’
Next NAF Conference proposes counter- measures to fraud in aviation