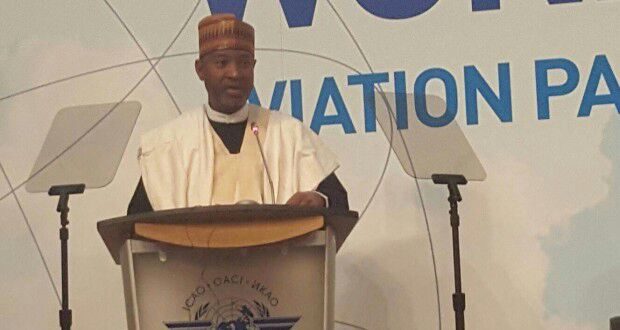 MINISTER of Aviation, Senator Hadi Sirika has urged the nation’s Aviation stakeholders to keep faith with the Aviation sector roadmap developed by the government.

According to him, the roadmap was developed to serve as a catalyst for a comprehensive overhaul of the aviation industry in Nigeria so as to position the country as an air transportation hub within West and Central African sub-region.

The Minister, in a statement issued by Director, Public Affairs, Ministry of Aviation, James Odaudu further asserts that the roadmap which includes the establishment of a national carrier, establishment of a Maintenance, Repair and Overhaul (MRO) facility, Concession of some airports, establishment of an Aviation Leasing Company, amongst others, will lay a solid and lasting foundation for Aviation development in Nigeria.

He assured Nigerians that the implementation of the roadmap,​ which, according to him, is in line with the theme of the ICAD, remains on course and that the results will become obvious in due course.

The Minister also affirms that safety and security have remained at the centre of government policies in the sector since the inception of the current administration and its efforts have been applauded by all, Including the International Civil Aviation Organisation (ICAO), the International Air Transport Association (IATA) and the African Civil Aviation Commission (AFCAC).

He appeals to all players within the industry to join hands with the government to ensure the realisation of the lofty objectives of the roadmap for the benefit of Nigerians and all users of the nation’s airspace.

The Minister also uses the occasion to reaffirm Nigeria’s unalloyed commitment to the ideals of the International Civil Aviation Organisation (ICAO) and other Aviation bodies of which it is a member.

The purpose of International Civil Aviation Day is to help generate and reinforce worldwide awareness of the importance of international civil aviation to the social and economic development of States, and of the unique role of ICAO in helping States to cooperate and realize a truly global rapid transit network at the service of all mankind

Nigerianflightdeck is an online news and magazine platform reporting business stories with a bias for aviation and travel. It is borne out of the intention to inform, educate as well as alter perceptions with balanced reportage.
Previous Yuletide: Air Peace steps in with additional aircraft seats to service South East/South
Next Governor Ortom, Benue indigenes welcome Air Peace’s inaugural flight to Makurdi