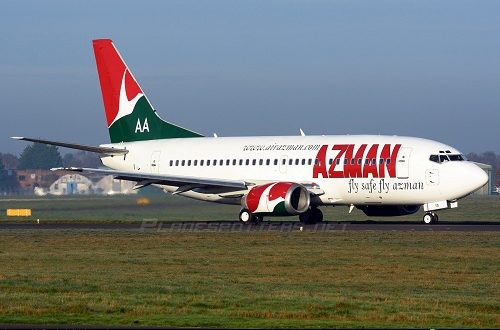 AZMAN Air is said to have told its workforce not to show up for work today following  operational reasons; but information going round is that the airline may not have renewed it’s Air Operators Certificate ( AOC).

NigerianFLIGHTDECK learnt from a source that the Nigerian Civil Aviation Authority (NCAA) suspended its operation for failing to meet the requirements for AOC renewal.

According to information gathered the airline had already told its workforce not to report to duties on Thursday as it was suspending operations ”due to operational reasons.”

It was also learnt that the regulatory body had given it much time to renew the AOC, but failed despite issuing the airline another 30 days ultimatum to meet the requirements.

An inside source further states that the airline is making a case for an extension in their license and is said to have paid N30 million ( unconfirmed) of the existing debt to the regulator.

Recall that during one of the meetings between Government agencies and airlines, the NCAA had revealed there was heavy indebtedness to the NCAA to the tune of N42bn and $7.8million.

Director General of the Nigerian Civil Aviation Authority ( NCAA), Captain Musa Nuhu after that meeting had explained that airlines will have to remit funds on a monthly basis to offset their legacy debts or risk non renewal of the Air Operators Certificate ( AOC) and Air Transport License ( ATL).

The above may not be the reason for the current situation but as it stands now the airline is currently not flying although scheduled for operation.

There are currently no staff available on their counters as at last check.

Nigerianflightdeck is an online news and magazine platform reporting business stories with a bias for aviation and travel. It is borne out of the intention to inform, educate as well as alter perceptions with balanced reportage.
Previous Ethiopian Airlines opens five-star in-terminal hotel inside Bole International Airport
Next Azman Air’s N1.2bn PSC debt, documentation reason NCAA withholding ATL