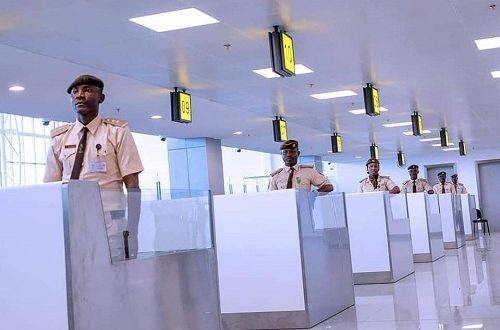 AIRLINES have been asked to ensure that they administer passengers information cards onboard their aircraft to fill before disembarking as this helps to reduce delays on arrival at airports.

This is just as it has also called on airlines to ensure proper profiling of passengers before boarding especially those with the right visas and other relevant documents for airport facilitation.

The Comptroller, Murtala Mohammed International Airport (MMIA) Lagos Command of Nigeria Immigration Service (NIS), Abdullahi Usman  made this call while playing host to members of the Association of Foreign Airlines and Representatives in Nigeria (AFARN)

According to him, it is the responsibility of the airlines apart from distribution of information cards to also ensure that the cards were filled appropriately by passengers to avoid delays at the Immigration counters.

He emphasized that if the documents or cards do not have the required information the NIS needed, it could result in officers asking certain questions to update the cards leading to delay in processing.

“With COVID, there will be minimal delay in clearance, minimal because right from port health, there are some routine that is needed to be done there some minutes and go. Once they come to immigration counter we will want to do it after another there are some information, if their departure cards does not go in line with what we need then we will ask them one or two questions and asking one or two questions to update the information some seconds will go.”

Usman urged airlines to ensure proper profiling of passengers before boarding especially with of those with the right visas and other relevant documents for airport facilitation.

He added, “Airlines, it is their responsibility to make sure that no passenger embark on a journey without the requirements if embarkation, your profiling, your screening is done in the diaspora, you and I here in the country, talk to your colleagues to do effective profiling of passengers that if you have the right visas you come in.”

The elderly and the nursing mothers he said would be given special attention even with the COVID, “from their arrival, we quickly give them their routes to go, the elderly ones and nursing mothers.”

Usman disclosed that the Service had introduced some measures in this period of the pandemic to assist some select persons, these include those seeking work permit and those with expired residence permit.

According to him, the Comptroller General, Mohammed Babandede had approved that foreigners whose residence permit in Nigeria had expired within the COVID-19 shut down should still be admitted in contact with the airlines.

“The Comptroller General has graciously approved  that those kind of passengers we should admit them in contact with airlines just let us know A, B, C document expired let us share the information and we will let you go ahead.”

On work permit, the MMIA Comptroller NIS said an online Temporary Work Permit, TWP visas, Pre-approval had been introduced because of the closure of the foreign missions due to the pandemic.

He explained that, unlike before now the Pre-approval was not seen but only the visa, adding that this was for a short time and when things pick up fully, it would no longer be acceptable.

“But now we have introduced online pre-approval temporary work permit because the foreign missions are closed and the approval is given to the foreigner to come a directive has been given to us that they should present the pre-approval to the airline and they administer them and at the time we now open full that will no longer be tenable.”

“It is just an interim measure and some airlines have been contacting us and we say okay allow them to come, we now issue them visa at arrival, you know we have visa on arrival and when they come, it is the responsibility of the passengers to do online payment not the airline that is the COVID online procedure.”

Nigerianflightdeck is an online news and magazine platform reporting business stories with a bias for aviation and travel. It is borne out of the intention to inform, educate as well as alter perceptions with balanced reportage.
Previous NCAA says hazardous weather may cause temporal airspace closure, seeks strict AC compliance
Next Post COVID-19 and your FBO – Facing the challenge