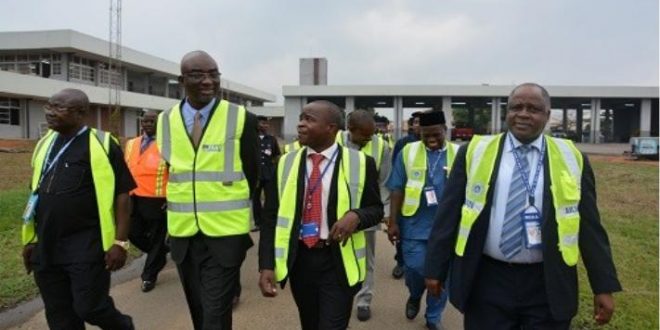 ICAO, NCAA team during the inspection of the Murtala Muhammed International Airport

INTERNATIONAL Civil Aviation Organization (ICAO), in conjunction with the Nigerian Civil Aviation Authority (NCAA), has commenced the implementation of the AFI Plan Aerodrome Certification Project for Abuja and Lagos Airports.

This was disclosed by the Director General, NCAA, Capt Muhtar Usman while addressing the counterparts from the International Civil Aviation Organization (ICAO) Western and Central African (WACAF) during the Pre – Certification meeting at the NCAA Conference Room.

The Regional Director of ICAO WACAF, Mam Sait Jallow, the team leader who was accompanied by the Regional Officer, Nika Manzi said that the objective of this mission is to follow-up on the AFI Plan Certification project and assist Nigeria with technical guidance towards the certification process.

According to Jallow, two airports were selected from Nigeria for AFI Plan Aerodrome certification project while one airport was selected from other states in the AFI Region.

The AFI Plan was adopted by the 36th ICAO Assembly to address the safety status of aircraft operations in the AFI Region. This plan is meant to address three focal areas which are: to establish and maintain a sustainable oversight system (infrastructure/capacity building); assist states to resolve identified deficiencies within reasonable time; and to enhance aviation safety culture of African aviation service providers.

The ICAO WACAF signed a Memorandum of Understanding (MOU) with NCAA and FAAN as participants in the ICAO AFI Plan Project in Dakar, Senegal on 11th August 2016.

Earlier, in his welcome address, the Director General (NCAA) affirmed that this project is crucial to global aviation as regards safety and security of the airport environment.

He said that the aerodrome certification is in line with the ICAO Standards and Recommended Practices (SARPs).The Nigerian Civil Aviation Regulations (NCARs) and all the necessary instrumentation for the process are already in place.

He further stated that the Aerodrome Certification process in Nigeria is carried out in five phases. At present, the ongoing certification of Murtala Muhammad International Airport (MMIA) and Nnamdi Azikiwe International airport (NAIA) have reached phases three and two respectively.

Capt. Usman added that the authority has trained technical personnel who are very competent to handle the challenges that may be encountered during the certification exercise.

In his response, Mam Sait Jallow said that the ICAO WACAF meets twice a year and their next meeting is scheduled for May 2017; therefore, all hands must be on deck to achieve a successful certification and present the report during the meeting.

DG therefore expressed profound appreciation to the ICAO WACAF team for their efforts in providing additional momentum to the aerodrome certification. He assured the body that Nigeria will meet up with the certification requirements within the stipulated time frame.

After the meeting, all concerned undertook an inspection of facilities at the Murtala Mohammed International Airport,(MMIA),Ikeja. The team leaves for Abuja today.

Nigerianflightdeck is an online news and magazine platform reporting business stories with a bias for aviation and travel. It is borne out of the intention to inform, educate as well as alter perceptions with balanced reportage.
Previous Delta brings popular Nollywood movies free on-board flights from Nigeria
Next NAMA relocates DSEES to Kaduna to complete navaid installations