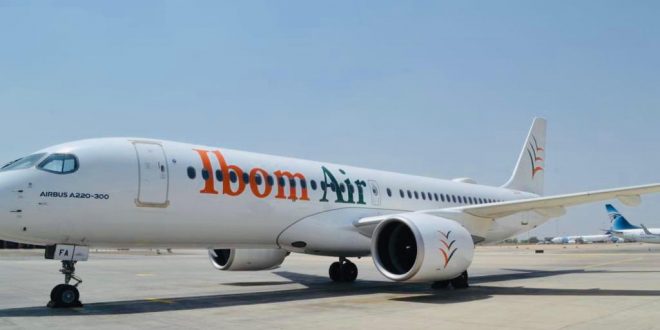 IBOM Air has concluded plans to take delivery of two were leased Airbus A220-300 aircraft to strengthen its fleets and bring the size to seven(7).

The aircraft, according to Chief Operating Officer (COO), George Uriesi is leased from Egypt Air and will not only increase Ibom’s capacity but would be a game changer because of its operating economics.

” Having commenced operation in June 2019 using CRJ900 aircraft additional brand two new Airbus 220 aircraft will be joining the fleet this month, bringing the number of aircraft in our fleet to seven(7) and making it one of the fastest growing airlines.

A source who spoke to NigerianFLIGHTDECK on the newly acquired aircraft gave further insight:

He said,”They are brand new. Bought by Egyptair before Covid and 12 delivered but they cannot use them all under current conditions. Three have been left unused.

“We’ve been suffering lack of capacity. The CRJ has done very well, but people are struggling to get seats on our flights. These A220s have operating costs almost same as the CRJs but with much better operating economics. We believe it will be a game changer…” the source said.

Ibom Air along with Dana last Friday became pioneer airlines for domestic code sharing in the Nigerian aviation industry, an alliance that is set to change the way airline operate in the country

Nigerianflightdeck is an online news and magazine platform reporting business stories with a bias for aviation and travel. It is borne out of the intention to inform, educate as well as alter perceptions with balanced reportage.
Previous Nnaji canvasses for more funding for aviation agencies to tackle bird strike situations
Next Green Africa declares website open for booking with N16,500 airfares