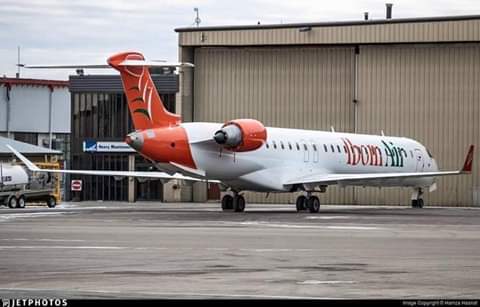 AKWA IBOM State government-owned Ibom Airline Company is gearing up to commence operations having concluded its recrutment process with 400 direct and indirect jobs for Akwa Ibom unemployed persons and acquiring no fewer than three aircraft into its fleet.

This is just as the State Government has maintained that the airline will at the moment operate within Uyo-Lagos- Abuja routes, stating that it ventured into airline operations to add to the capacity of existing airlines.

State Commissioner for Special Duties and Aviation Development, Mr. Akan Okon who revealed this in Uyo said the recruitment process concluded, with an Akwa Ibom son as Chief Pilot maintained that the heavy traffic in Akwa Ibom airport has made it imperative for the state government to join the few airlines operating there.

“Ibom Air has come to stay. I am happy to tell you that we have completed recruitment with good number of Akwa Ibom children. The Chief Pilot is from Akwa Ibom. Three aircraft are secured and are ready for commencement of operation. It is completely owned and operated by Akwa Ibom State Government and it will provide 400 direct and indirect jobs.” He said

Okon said though the airline is exclusively owned by the Akwa Ibom State government, its management and operations will completely align professionally with world best practices.

He said members of staff of the new airline, recruited strictly on merit are currently undergoing training in their various areas of specialties, getting set to kickstart operations as soon as required formalities are concluded.

On the Victor Attah International Airport, Okon said that is at the moment undergoing work to improve the standard of the airport with the ongoing second runway, new taxiway, a power sub-station, new commercial building and other unique features.

Such improvements, he said made it possible for the landing of over 20 aircraft in the President’s entourage during the flag off of the APC presidential campaigns in Akwa Ibom for the south-south region.

He attributed the state government’s success in this direction to governor Udom Emmanuel whom he said has consistently made what may appear impossible to others, a possibility in the state.

Okon also applauded the Director of Air Worthiness of the Nigerian Civil Aviation Authority, Engr Ita Awak for his role in ensuring ease of operations and the actualization of the purpose for which Ibom Airport was established.

“Some Akwa Ibom sons in positions of authority have been very supportive, prominent among these is the Director of Air Worthiness, Engr Ita Awak who has worked so hard to ensure that the MRO becomes a reality, he believes such development will benefit Akwa Ibom children, and so he is not after political party, he is about the development of Akwa Ibom State, we sincerely commend him,”he said

Nigerianflightdeck is an online news and magazine platform reporting business stories with a bias for aviation and travel. It is borne out of the intention to inform, educate as well as alter perceptions with balanced reportage.
Previous AIB Commissioner projects on infrastructure upgrade, capacity development in 2019
Next Elumelu’s Business Tips : Luck plays a vital role in business success