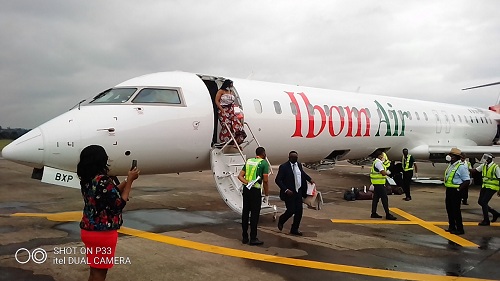 Ibom Air having touched down at the Enugu International Airport

IF everything goes according to plan, the Ibom Maintenance Repair Organization (MRO ) facility at the Victor Attah International Airport Akwa Ibom will come on line within 18months to two years increasing the chances of creating a hub of sorts with the Airport.

Recall that the Akwa Ibom state government, while establishing the airport, MRO and later on Ibom Air had maintained that the long term plan was to ensure that Akwa Ibom is made a hub for travel, tourism and business.

Restating this call, the managing director, Chief Operating officer of Ibom Air, Mr. George Uriesi during the airline’s inaugural flight into the Akanu Ibiam International Airport (AIIA) Enugu affirmed the state government’s move while unveiling plans to improve on what is.

Uriesi  said,” The maintenance hangar is in  completion project,  as we are talking now we are repositioning to start the work and that will be done in about 18 months to two years along with the new terminal  which will allow us to hub between domestic and international passengers in a very efficient way, so the design was done together with Ibom Air and the  airport so it is befitting  the plans for the future.

The US$100m Ibom Airport Maintenance, Repair and Overhaul (MRO) facility located in Uyo, the Akwa Ibom State capital was commissioned in December 2012 to cater to maintenance on Boeing 737 aircraft, which is about 70 per cent of commercial airplanes by indigenous airline operators, Airbus and Bombardier aircraft.

The facility is large enough to accommodate two wide body aircraft like two Boeing 747s or four Boeing 737s, parked side-by-side, nose-in, fully contained within the building with all the dormitories, the spacing, the equipment and all the configurations that will make for effective aircraft maintenance.

This project, when operational, is one aviation industry is looking up to, to further drive down the huge capital flight the country experiences when it comes to carrying out checks  for aircraft.

For the airline and its plan within the hub network, Mr. Uriesi explained that Ibom Air would expand albeit gradually spreading its wings internationally but will not jump into routes just to fly them as it is a profit-driven venture.

“We will expand organically, gradually into the West and Central Africa. We will not rush anything, we go into a route, stabilize the route ensure that it is becoming profitable; we go into the next route not just go from route to route. We will watch the number carefully. So we are very hopeful and confident that Enugu will be a good destination and after Enugu is settled and comfortable we will move to the next route,” he said.

Ureisi however decried the economic impact of the COVID-19 pandemic which has caused a loss of revenue and has forced even mega carriers to re-evaluate their businesses with some of them sacking staff while others are folding up.

He said Ibom Air too was negatively affected but the focus is survive, keep staff stabilize the business and reaches the trajectory for 2021.

He said,” Yes COVID -19 has impacted significantly and we lost a lot of revenue not flying for a long time while our costs continue to run but we are back now and we have redesigned our trajectory and I am glad to say since we came back we have been following our trajectory redesign, we are hopeful to survive, it is still touch and go, the industry is suffering.

“Big totally established airlines are sacking left right and centre. Major airlines are collapsing, so we are trying very hard first of all not to sack staff, secondly to build the business back to the former trajectory and to expand out footprint in Nigeria.

“In the last two months we did Calabar and Enugu, we believe we will do one more before the  year runs out and then next year we pick up our trajectory. We are supposed to end this year with seven aero planes but we know we are going to end it with only five because this is not the market to go and get more aero planes. So when it stabilizes and we are satisfied with what we are seeing I believe in 2021, we can start our growth trajectory again.”

Speaking on the market and how Ibom Air specifically wants to ease into international designations, Group Manager, Marketing and Communications, Anniekan  Essienette explained the COO’s views further using the airlines new routes and intention in the no distant future.

She said,” Enugu happens to be a commercial hub and it is a hub for the eastern states so coming here is pretty strategic because aside of covering domestic traffic, it will also act as hub, stop points for international travel as well.”

“Certainly, we will fly internationally but our first step is to see that we  cover the local market as much as possible, there are travel needs that we are here to solve and that is why ad are opening  the various routes we are.

“As you can see our routes are very strategic. We started from our home state Uyo and expanded to Lagos and Abuja which is our commercial and political capital p, we are in Calabar because of the need in that space and here we are in Enugu as well. As we go along, the next phase after covering more national routes is to go international,” she said.

Nigerianflightdeck is an online news and magazine platform reporting business stories with a bias for aviation and travel. It is borne out of the intention to inform, educate as well as alter perceptions with balanced reportage.
Previous Arik Air returns to service, says customers can modify tickets
Next NAHCO takes delivery of ₦500m ground support equipment, upgrades facility