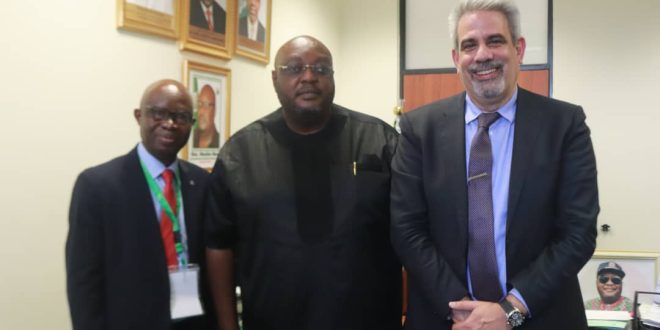 The International Air Transport Association (IATA), yesterday, disclosed that Foreign Airlines’ fund trapped in Africa stands at $1.1 billion with Nigeria having half the share of the blocked funds at $550million.

President for Africa and Middle East, IATA, Kamil Ala Wadhi revealed this yesterday while he paid a courtesy visit to the chairman, Aviation committee, House of Representatives, Hon. Nnolim Nnaji.

Alawahdi who acknowledged the interest shown by the Speaker of the House of Representatives, Femi Gbajabiamila, and Nnaji towards finding solutions to the member airlines’ blocked funds in Nigeria, said: “I do appreciate your interventions and l urge you to continue to do more so that it can be quickly resolved”.

The House of Representatives Committee Chairman on Aviation, Honourable Nnolim Nnaji while reacting appealed to the International Air Transport Association (IATA) to prevail on its member airlines to show understanding as the various organs of government were making efforts to ensure that their tickets proceeds are duly remitted.

The committee Chairman reminded his guest that the prevailing situation was in consonance with the global economic meltdown assuring him that the Federal Government through the Central Bank of Nigeria, (CBN) had put in place a mechanism for the liquidation of the blocked funds.

He also told the IATA Vice President that the Federal Government has made tremendous investments in the aviation sector to improve security and safety of air transportation in the country.Honourable Nnaji also praised the association for its contributions to the safety of air travel through its operational safety programmes, (IOSA) which a number of Nigerian Airlines have benefited from.

It would be recalled that the House of Representatives Leadership had at the heat of the crisis intervened by bringing the Minister if Aviation, Senator Hadi Sirika, the CBN Governor, Godwin Emefiele and IATA representatives including some of the affected foreign airlines to discuss the way forward.

The intervention led to the phased remittances deployed by the CBN to gradually liquidate the backlog of the trapped funds.

Nigerianflightdeck is an online news and magazine platform reporting business stories with a bias for aviation and travel. It is borne out of the intention to inform, educate as well as alter perceptions with balanced reportage.
Previous Dennis Jones writes BAGAIA Commissioner thrilled with mentoring experience
Next Dana Air recognized for young aviation professionals’ support