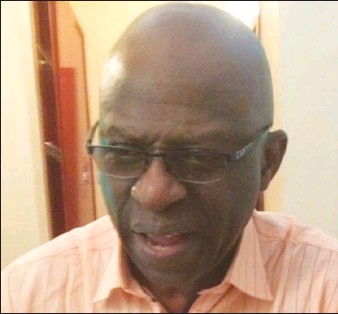 Former Rector of the Nigeria College of Aviation Technology ( NCAT), Capt. Samuel Caulcrick has stressed that the need for a Maintenance Repair and Overhaul ( MRO) facility in Nigeria means building the Nigerian economy instead of creating business for other economies.

This is just as he has raised a theory on how the government can create  an enabling environment for indigenous MRO investors.

Captain Caulcrick explained the urgent need for having an indigenous MRO in the country while speaking to reporters at the weekend stating that the facility will bolster the economy, reduce need for scarce foreign exchange resources, reduce capital flight, create jobs for Nigerians among many other advantages.

He former NCAT boss also said situating an indigenous MRO in the country will remove the cost of ferrying aircraft for hours which is done with dollars to and from and reduce the burning of Jet A1 which is an additional cost to airlines.

He said,”Once an aeroplane is flying in Nigeria, it means it is our economy that is supporting the aircraft to fly. Let’s say it is now one hour to go for an MRO, it means our economy has supported that business for the maintenance to be ready for it to come to the hangar.

Now, we take the business of the MRO to foreign countries. It means we are creating business for those countries when we were the one that created the business. So, it is better to let it stay within the economy. That is one argument by which the MRO supports the economy. So, this economy should not lose to other economies after creating that business.”

“Also, MRO supports the naira in the pockets of everyone. Once the aircraft is taken out, there is the cost of labour that would be paid by the airline. Instead of the airlines to save that Nigeria it earned in Nigeria, the airlines go to the foreign exchange market and start looking for dollars. The manpower too is no longer local and the airlines go to the foreign exchange market, looking for dollars, thereby further putting additional pressure on naira. This affects our economy and the Nigerian market,” Caulcrick posited.

He further said that locating MROs in Nigeria also meant the government earns personnel tax, as being a formal employment means there is Pay As You Earn (PAYE) which if maintenance is taken abroad  another country would now earn.

“The advantage of having an MRO in Nigeria is that the company is going to use local labour, which is good for the economy, personnel and the government in terms of tax revenues and the experience that the technical experts are going to get, too.

“Then, you don’t have to pay for fuel to ferry the aircraft to and fro, which you were going to buy in dollars. So, those are the advantages.

“What Nigeria would gain is the cost of labour, tax and local maintenance. What Nigeria is losing are taxes that are being paid to foreign countries instead to Nigeria and the money that you are going to change into dollar from naira.

On creating an enabling environment for MRO investors Caulcrick said,”This is simple. This can be done through policy. For instance, the NCAA can say it would not renew an existing AOC or issue an AOC to an intending operator without a local MRO identified in the application form. The government can give them a timeline because this could take up to three years to accomplish.

On work ethics and experience, Captain Caulcrick said the  MRO is a regulated environment; meaning the way maintenance is done in Washington, UK, France, Accra and others, it is the same way it will be done in Nigeria  because in aviation, everything  is done according to the books.

“So, when it comes to quality, it doesn’t matter where that maintenance is carried out, it would be according to what the manufacturer and ICAO stipulated.”

Nigerianflightdeck is an online news and magazine platform reporting business stories with a bias for aviation and travel. It is borne out of the intention to inform, educate as well as alter perceptions with balanced reportage.
Previous Mshelia hails Civil Aviation Policy review; flays age-long State Weather Minima Laws
Next Civil Aviation Policy review welcome development as no nation builds itself- Captain Mshelia