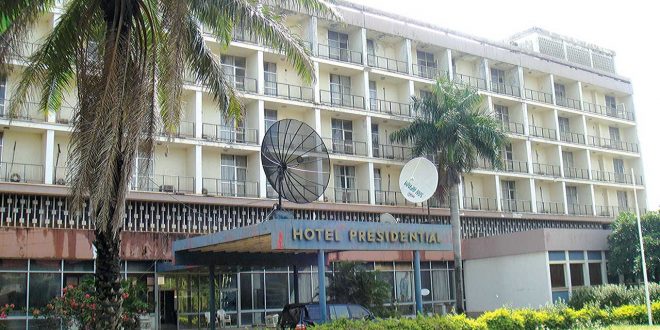 MANAGEMENT of Hotel Presidential Enugu have accused the state Commissioner of Culture and Tourism, Mrs. Rita Mbah, of forcing herself into the hotel Gestapo style armed with a group of soldiers, policemen and Civil Defence Corps/Legionnaires attempting to take over the Property.

This is just as the management has called on the Enugu State government to rein in its commissioner accusing her of allegedly carrying out an unsanctioned directive with clandestine motives for the reason of her self-enrichment.

The statement released and signed by Executive Director Hotel Presidential, Mr. China Anosike, claimed the commissioner attested to the fact that she was asked to take over as part of a government directive and that there were potential investors looking into the Hotel.

Efforts by security men of the Hotel to stop the onslaught because there was no court order backing the takeover proved abortive when the armed men threatened the lives of the Hotel security.

The statement released to Nigerianflightdeck.com read: “I wish to bring to your attention a most unfortunate development regarding our Hotel Presidential, Enugu Project. On Monday October 30th 2017, a group of armed soldiers, policemen and Civil Defence Corps/Legionnaires forced their way into the Hotel Presidential, Enugu manhandled our Security Personnel and attempted to take over the Property.”

“Since they presented no Letter authorizing them to take that action or a valid Court Order our Security Personnel naturally resisted but had to back down when their lives were threatened.”

“The Invaders claimed to have been instructed to “take over the Hotel” by Mrs. Rita Mbah, the Commissioner of Culture and Tourism who later came to the site in company of some other persons we learnt were “Prospective Investors”.

“When I contacted Mrs. Mbah to confirm if indeed this narrative was correct, she said she was discharging a “Government Directive”. I advised her about the obvious illegality of her action but she proceeded regardless. Our lawyers are considering our options and have instructions to take all steps necessary to protect our legal interest.”

“PHL has been in uninterrupted possession of the Property since August 2013 and has carried out extensive work both on-site and offsite with a view to redeveloping and transforming the hotel to a world-class Hospitality facility. Unfortunately, we have experienced a number of setbacks the latest of which is a pending law suit by an entity which claimed to have had a previous interest in the Property,” Anosike’s statement read.

“To the extent that PHL were joined as co-defendants in the suit together with the Officials of the Enugu State Government, we advised the Government to resolve the matter as the facts relating to the dispute arose prior to our engagement.”

“Since 2015, we have met with the Government team including His Excellency, the Governor, his Deputy, members of the State Privatisation Council and the Commissioner of Culture and Tourism and we have kept them apprised of our challenges and suggested ways in which we can move forward.

At the last of such meetings held in June this year, it was agreed that efforts would be made to reach out to Status Symbol Ltd, the litigant in the aforesaid suit with a view to arriving at an amicable resolution so that we could all move forward without further hindrance.”

“In the meantime, PHL has continued to work with its Consultants to fine tune plans for the restoration of the Hotel including making funding arrangements which have altered significantly given the foreign exchange situation and level of inflation in the country.”

“We therefore received with great shock and disappointment the information that Mrs Mbah had decided against good reason, common sense and more importantly in flagrant disregard of the provisions of a legally binding agreement taken matters into her own hands and orchestrated an attempted violent takeover of the Hotel from PHL.”

“From available information, it appears that her action apart from being patently illegal has undertones of a personal enrichment agenda as we are reliably informed that she has struck an arrangement with “would – be Investors” to carry on business activity on the Hotel site from which she would benefit personally.”

“This sort of impunity and total disregard for the Rule of law which was common in times past is completely unacceptable and will only serve to deter genuine Investors.

We have as at 30th September 2017 invested over a $1,200,000 (One Million Two Hundred US Dollars) in the Project and will take all necessary steps to protect our investment.

We take this opportunity to appeal to His Excellency, Governor Ugwanyi whose record so far is quite impressive not to allow the action of a few misguided elements in his administration tarnish his hard- earned reputation.”

Nigerianflightdeck is an online news and magazine platform reporting business stories with a bias for aviation and travel. It is borne out of the intention to inform, educate as well as alter perceptions with balanced reportage.
Previous Onyema decries lack of adequate legal representation for airlines
Next MamaJ organises youth career initiative fair November 24