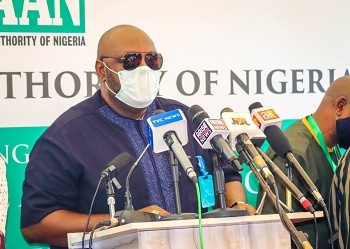 The Chairman House of Representatives Committee on Aviation, Honourable Nnolim Nnaji requested the Minister of Aviation, Senator Hadi Sirika to give clarification on the exclusion of the Nigerian Airspace Management Agency, (NAMA) in the 2023 Appropriation Bill as the agency is a critical safety arm of the aviation sector that must not be ignored.

Honourable Nnaji stated this during the committee’s 2023 budget defence meeting with the Minister of Aviation, Senator Hadi Sirika who led the Ministry officials to the National Assembly Tuesday .

The Chairman’s remarks were prompted by the omission of the agency in the 2023 Appropriation Bill which he said would be corrected adding that his Committee was already deliberating on the issue with Senate committee counterparts to ensure that the anomaly was rectified during the appropriation process.

Honourable Nnaji noted that the prevailing security challenges have put enormous pressure on the available infrastructures in the industry and as such the country could not afford to neglect the needs of a safety agency like NAMA.

The committee chairman disclosed that the committee would critically examine the performance of the Ministry’s budget from 2020 to 2022 because some of the projects had been on-going since 2020.

He stressed that the committee expected that the current budget performance report should comprise the full implementation details of the two previous budget years.

Nigerianflightdeck is an online news and magazine platform reporting business stories with a bias for aviation and travel. It is borne out of the intention to inform, educate as well as alter perceptions with balanced reportage.
Previous IOM, NIS partner to raise awareness on SoM, TiP across Nigeria
Next Dana Air marks 14th year in operation, gives out free tickets onboard flights