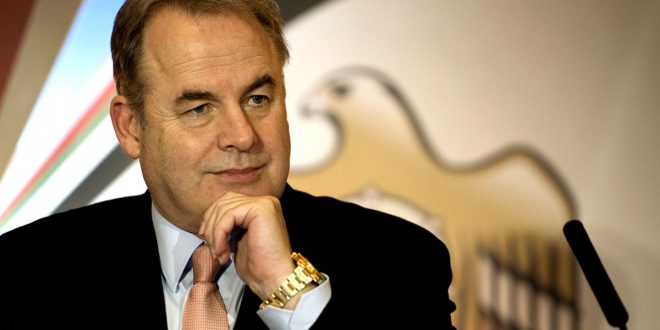 Hogan set to step down as Etihad President, CEO as transition process begins

NigerianFlightDeck 26th January 2017 Appointments and Labour Comments Off on Hogan set to step down as Etihad President, CEO as transition process begins 473 Views

COME second half of 2017, President and Chief Executive Officer of Etihad Airways, James Hogan will leave the role after serving the airline for 10 years  according to the Etihad Aviation Group Board of Directors.

The Board and Mr. Hogan first initiated the transition process last year with the formation in May of the Etihad Aviation Group, a diversified global aviation and travel organization.

Commenting on Mr. Hogan’s time at Etihad, H.E. Mohamed Mubarak Fadhel Al Mazrouei, Chairman of the Board of the Etihad Aviation Group said: “We are very grateful to James. In just ten years, he has overseen the growth of the company from a 22 plane regional carrier into a 120 aircraft global airline and aviation group, with seven airline equity partnerships which together serve more than 120 million guests every year. It is a business which has set new benchmarks for service and innovation. Under his leadership, the company has provided new opportunities for thousands of Emiratis and has been a critical element in the remarkable progress of Abu Dhabi and the UAE. We look forward to James’ continued association with Abu Dhabi in new ways.”

James Hogan commented: “Along with the Board and my 26,000 colleagues, I am very proud of what we have built together at Etihad and of the company’s substantial contribution to the UAE and to the development of Abu Dhabi. The last decade has seen incredible results but this only represents a first chapter in the story of Etihad.”

Commenting on current priorities for the business, H.E. Mazrouei said: “To position the company for continued success in a challenging market, the Board and management team will continue an ongoing, company-wide strategic review. We must ensure that the airline is the right size and the right shape.

“We must continue to improve cost efficiency, productivity and revenue. We must progress and adjust our airline equity partnerships even as we remain committed to the strategy.”

Last month, Etihad Airways unveiled plans to create a new European leisure airline group in a joint venture with TUI AG. A new codeshare agreement with Lufthansa and an aircraft leasing agreement between airberlin and Lufthansa were also announced. As a minority shareholder, Etihad is actively participating in the next phase of Alitalia’s restructuring plan.

H.E. Mazrouei added: “Etihad is a great business with strong fundamentals and a deeply experienced aviation and airline management team. These assets, along with a realigned organisation, provide more agility and added focus as Etihad enters the next phase of its development.”

Mr. Hogan will join an investment company along with Etihad Aviation Group CFO James Rigney, who will also leave the company later this year.  A global search for a new Group CEO and a new Group CFO is already underway.

The Group has developed a senior management structure with strength in-depth, led by a highly-regarded senior team. This team includes Peter Baumgartner, CEO, and Richard Hill, COO, of Etihad Airways; Bruno Matheu as CEO of Airline Equity Partners; and Jeff Wilkinson as CEO of Etihad Airways Engineering. Darren Peisley is Acting Managing Director of Hala, the company’s destination marketing and global loyalty unit. A further strengthening of the Group structure was announced earlier this month with the creation of Etihad Airport Services led by Managing Director Chris Youlten.

Mr. Hogan took the helm at Etihad Airways in 2006, with a mandate to develop a safe, best-in-class airline, operating on a sustainable commercial basis and contributing to the future economic success of Abu Dhabi.

Nigerianflightdeck is an online news and magazine platform reporting business stories with a bias for aviation and travel. It is borne out of the intention to inform, educate as well as alter perceptions with balanced reportage.
Previous NiMet douse speculations of tension over resumption of new DG, staff promotion
Next Bank witness explains how former NAMA boss, others allegedly stole N6.8b